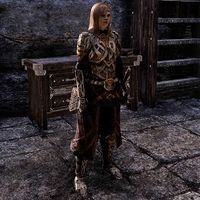 Arzorag is an Orc found inside Skalar's Hostel. Acting on behalf of King Kurog, she handles the daily contracts targeting various world bosses in Wrothgar. When you talk to her, you have the option to ask about her job,

When you speak to Arzorag for the first time, she says, "Looking for work? If not, move along. I haven't got time for idle chit-chat."

Or, after you finish one of her quests, when a new quest is available, she'll say, "Thank Mala—I mean, thank Trinimac you're back. Got another crisis for you. Interested?"

Both lead to the same question.

I'm here to work. What do you have for me?

You can also ask her about herself.

What are you doing here?
"The king's business. I serve the throne on matters of civic policy and urban development. When one of our citizens has a problem that threatens the public good, they come to me."
And then you get adventurers to do the work?
"Yes. Exactly. This surprises you? Sending out the city guard is the Breton way, the High Elf way. In Wrothgar we do for ourselves. I facilitate deals between private citizens—nothing more.
We are all citizen soldiers. We should act like it."

"I've received some troubling reports about Worm Cult activity in Wrothgar. If the worms are here, the king wants them eradicated.
I've already consulted with the Redguard priest, Lilyameh. She says the cultists are trying to summon something."
What are they summoning?
"A beast called Zandadunoz the Reborn. That name is well-earned. He just won't stay dead.
The worms have built a series of obelisks on the frontier. Examine these pillars and and kill any cultists you find. Talk to Lilyameh if you need some guidance."
I'll look into these obelisks and take care of Zandadunoz.
"These cultists must be taught that Wrothgar is off limits. Once you've crushed their operation, check in with Lilyameh. Her order will reward you for the effort."

After stopping the cultists:

"I hear that those cultists are in full retreat. Good work. Lilyameh will want to hear the details. Go speak to her."

"Laborers from all over Tamriel have come to Orsinium, eager to carve out a better life. I'm sure I don't need to tell you, it's arduous work. They need hearty meals to stay strong, and there's not enough to go around."
(?)
"Bagrugbesh is in charge of the city's food stores. She tells me we're almost out of meat and we need more in a hurry. Hunt mammoths, bears … any big animal you can find.
Also, kill some of those damned poachers. Bagrugbesh can give you more details."
(?)
"(?)"

After you have collected the meat and dealt with the poachers:

"Well, well … that's quite a bundle you've got there! Get that meat to Bagrugbesh as soon as you can. We've got a lot of mouths to feed."

"One of our elder shamans insists there's an arcane corruption spreading through the hills and forests of Wrothgar. Says it's been stirring up the animals and making them more aggressive. If that's true, this blight will have to be cleansed."
How do you plan on dealing with it?
"This totem should do the trick—take it. Ushang the Untamed says it has the power to disperse pockets of corruption.
Corintthac the Abomination is behind this, I know it. When you eliminate the corruption, eliminate him too. Ushang might know more. He's just over there."
I'll take care of this corruption and deal with Corintthac as well.
"Ushang is … eccentric—but he pays well and his totems are always reliable. If you take care of this corruption, I'm sure he'll make it worth your while."

If you speak to her before handing the quest in to Ushang, she will have heard about your success:

"I hear Corintthac's lackeys are half-mad with grief. Seems you've really set them back.
Talk to Ushang. He'll want to hear that the job is done."

"Orsinium may have started as a home for the Orcs, but it's becoming a city of immigrants. More arrive by the hour—mostly by caravan. Unfortunately, the trip can be treacherous. Riekr attacks have increased tenfold since the king opened the borders."
(?)
"At first? Robbery. But now they're abducting travelers and taking them off into the wilderness. That Imperial caravaneer over there, Sonolia Muspidius, has leads on where. I'll mark the locations on your map.
She's also identified their leader, King-Chief Edu."
(?)
"(?)"

Once you have returned, Arzorag will mention that the escaped prisoners made their way back successfully:

"I hear you freed those hostages. Good work. Once we get them a new set of clothes and a hearty meal, they'll be ready to get to work.
Sonolia's been looking for you. You should go speak with her."

"If Orsinium is to become the rival of other great cities, we'll need more than buildings. The king wants culture as well.
We commissioned a High Elf scholar named Cirantille to deliver some of her books to the city, but her shipment was attacked."
Who attacked the shipment?
"Ogres. Apparently, they tore the books to pieces. I'll mark their lairs on your map.
Cirantille blames one ogre in particular. Mad Urkazbur. She wants him dead and what's left of her books returned. If you want to know more, talk to her. She's just over there."
I'll get the books back and kill Mad Urkazbur.
"If you manage to reassemble one of those books, take it back to Cirantille. We've no use for books covered in ogre dung."

When you return to the inn with the pages in hand:

"Ugh. That books smells like it was dug out of a Black Marsh latrine. Even so, I'm sure Cirantille will pay you for it. She takes her work very seriously."

"The market is the beating heart of the city. Our trade policies have brought wealth, yes, but there is no commerce without risk.
Take this Khajiit, Birkhu. He peddles strange Dwarven baubles. They seemed harmless enough, but now I'm not so sure."
Why is that?
"He says he uncovered some Dwarf junk buried in the snow up north, and it led to something big. ""Nyzchaleft,"" I think? Bah. Dwarf mischief.
Investigate the machines and take care of this thing he discovered. He's over there if you want more details."
All right. I'll see what I can find out about these machines.
"Don't hesitate to break those machines to pieces. This Dwarven garbage is nothing but trouble.
Make sure to speak to Birkhu when you're done. He's anxious to close the book on this."

Once you have destroyed the Dwemer Automatons:

"It's done, yes? That machine is destroyed? Hope you didn't break a blade on that thing. Ugh. Dwarves.
Birkhu's been asking after you. You should settle accounts with him before he passes out."

This Elder Scrolls Online-related article is a stub. You can help by expanding it.
Retrieved from "https://en.uesp.net/w/index.php?title=Online:Arzorag&oldid=2291338"
Last edited on 1 January 2021, at 00:40