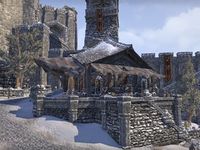 The House of Orsimer Glories is a museum in Orsinium. It can be found in the center of town, across from the Mages Guild. Curator Umutha is the only person found inside, although Berrice Notte will join her after the quest A Treasure in Need of a Home. The museum contains pedestals for 22 relics found throughout Wrothgar.

See the Wrothgar Relic Hunter page for a list of where to find the relics. 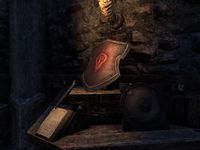 The Agra Crun is a shield, given to you by Curator Umutha at the start of the quest Awaken the Past. 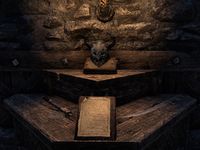 Uzdabikh's Helm is an Orcish helm found at Sorrow. You'll be led to it as part of the quest Awaken the Past. 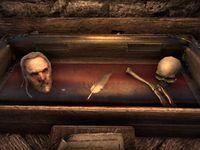 The Black Quill is a feather quill found on a bench by a campfire in the westernmost chamber of Coldperch Cavern. The quill appears as a small sack. 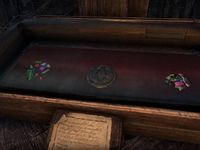 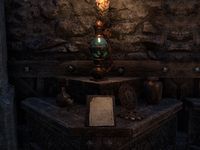 The Dwarf Light is a Dwemer lantern. It can be found in a ruin overlooking Nyzchaleft Falls, to the south of the boss (map). 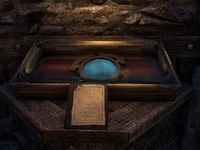 The Eye of Zthenganaz is a Dwemer gear with a blue gem set in the center. It can be found to the right of the Rkindaleft entrance, look for a large rock with the remains of a tree on top of it (map). 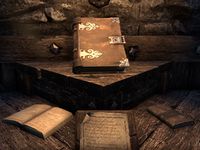 The First Charter is a book found in small campsite above the entrance to Exile's Barrow. It is guarded by two ogres and is close to the nearby skyshard (map). 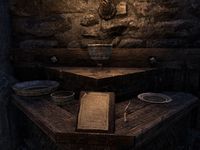 The Frostbreak Chalice is a chalice found in the southeastern tower of Frostbreak Fortress, on the bottom floor atop a crate (map). 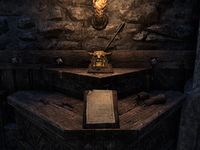 Guthrag's Mask is a monstrous golden mask found atop a watchtower to the east of Fharun Stronghold (map). 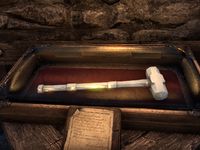 The Hammer of Glass is a light blue warhammer found in a bedchamber at the end of the eastern hallway in the northernmost section of Old Orsinium, near the final quest boss. 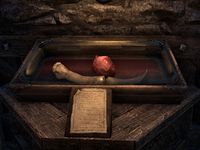 The Heart of Zandadunoz is a heart-shaped object found on an altar at the Unfinished Dolmen (map). 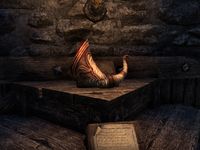 The Horn of Beasts is a horn found in an alcove along the coast near Old Orsinium, near the skyshard (map). The alcove contains a small camp with a backpack and a skeleton, and is guarded by a troll. 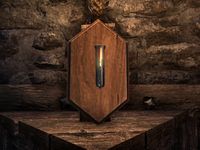 Liquid Silver is a silver vial found inside Argent Mine. It appears as a small chest and is located on a table, inside a tent in the easternmost chamber. 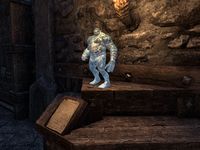 Mad Urkazbur's Ice-Effigy is a small ice statue of Mad Urkazbur, found underneath a rocky overhang at the Mad Ogre's Altar (map). 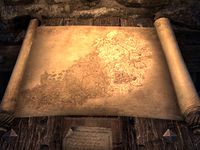 Thugbo's Map of Clans is a large map found atop a flat rock, near a broken cart just southwest of Orsinium's western entrance. The cart is north of the broken aqueduct, to the left as you cross the wooden bridge from Merchant's Gate. It is guarded by echatere (map). 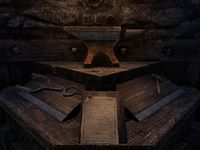 Nuzava's Anvil is an anvil found in an overturned cart just east of the Icy Shore Wayshrine. The cart is near a stream and is guarded by three Vosh Rakh enemies (map). 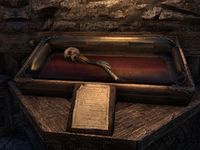 The Scepter of the Riekr King-Chief is a staff-mounted skull found on a weapons rack at the King-Chief's Throne. The rack can be found beside the tents on the southern side of the camp (map). 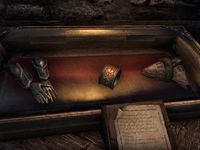 Thukhozod's Bracer is a bracer found in Thukhozod's Sanctum, on a bench in the main chamber. The bench is tucked into the northwest corner of this chamber, on the lower level. 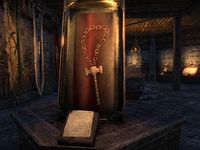 The Torc of Baloth Bloodtusk is a hammer amulet found in Honor's Rest Catacombs. It is located in an open sarcophagus on the south side of the westernmost room of the dungeon. 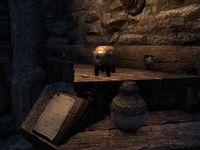 The Trinimac House Idol is a golden bear statue, similar to the ones you see throughout Wrothgar. It can be found inside one of the tents at the entrance to Paragon's Remembrance (map). 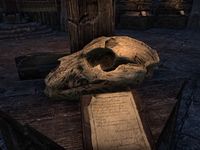 Coldwind's Skull is a bear skull which you must recover as part of the quest A Cold Wind From the Mountain. Among other prerequisites, receiving this quest requires that all twenty other relics have been given to the museum. 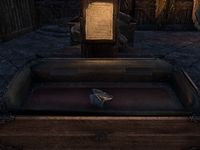 The Armlet of Torug is a bracer which can optionally be given to the museum at the end of the quest Sorrow's Kiss. This relic is not needed for any achievements, and you will still be able to receive A Cold Wind from the Mountain even if you don't give it to the museum. 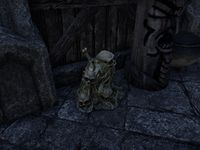 Although not a relic, Doranar will create a piece of ogre artwork for the museum during the quest Atypical Artistry.