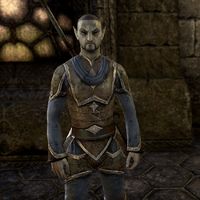 Garyn Indoril is a Dunmer and the only son of Tanval, the grandmaster of House Indoril. He is gifted in magic and is usually never far from his father's side. Garyn Indoril grew up in the city of Ebonheart and is his father's pride and joy.
Garyn Indoril is loyal to his father, his friends and his country. He is active in the Pact's defense against the Daggerfall Covenant in the region of Stonefalls.

Garyn doesn't play an instrumental part in this quest. Rather, you are first introduced to him here, where he is standing beside his father.
Speaking to Garyn before Tanval:

"You should talk to my father, Grandmaster Tanval. He leads House Indoril."
You help your father in battle, Garyn?
"It is my pleasure to uphold my family's honor.
With my father leading the defense, victory is certain."

After speaking with his father, he'll say either:

After returning with the skull of Nam Indoril:

"Speak to my father. He's been asking for you."

Speaking to him before accepting the quest:

"My father requires you again."

Asking Garyn to show you to the west gate:

"My orders are to help you."
Tanval said you would lead me to the west gate.
"Then we should go."

If you choose to have Garyn show you the way to the west gate, he will have some commentary along the way.

Arriving at the gate:

Garyn needs to leave after he's delivered you to Holgunn.

Garyn Indoril: "I have duties with my father. Fight well."

In the Indoril tomb, Garyn will be defending his father while he performs the ritual to summon Balreth.

Garyn Indoril: "More coming! Keep them away from father."

During this quest, you have been ordered by Tanval Indoril to meet his son at Ash Mountain, where he is working on a way to seal Balreth away after his father released it.

"Good to see you here, soldier. We'll need all the help we can get."
Your father told me to report to you.
"And I'm glad he did. Balreth, it seems, does not want to go quietly back into his cage."

Garyn sends you to Othrenis to help one of his scouts figure out a way to reseal Balreth. Othrenis is the final resting place of the Chimer mages who sealed away the Brother of Strife in the First Era. Knowing this, Garyn figures it would be a good place to start looking for answers.

"Father was sure Balreth was the only way to defeat the Covenant army. But it seems he may have been a bit hasty in his actions."
What do you mean?
"The ritual Father gave me to rebind Balreth isn't working. Something's gone wrong. Daedra are pouring from the volcano, and I'm worried about the nearby towns. We need answers, and we need them fast."
What would you have me do?
"Our best bet is to go back to the source: the Mages that first bound Balreth. Some of them are buried at the necropolis to the south, a place called Othrenis. I've sent a scout, Onuja, to learn what we need. Go there, and aid him."
I'm on it.

Speaking with him after accepting the quest:

"Good luck at Othrenis, my friend. The dead do not always rest easily."

Return to Garyn once you have the information you need from Othrenis.

"Rumblings from the mountain have us all on edge. Balreth is up there somewhere.
I hope you've brought good news."
I spoke with a Mage from the past and learned how to bind Balreth.
"Excellent! My friend, you are an asset and blessing on the Pact. I sense the hand of the Three here."

Garyn requires your aid again. Balreth must be bound. Before you accept the quest from him (Or if you exit dialogue before accepting the quest after Quiet the Ringing Bell), Garyn will say:

Garyn Indoril: "Shore up the defenses on the path! We can't let those scamps off the mountain."

"Now we'll get things done. By Vivec, Balreth will be bound again!"
I know what to do. The mages of the past shackled Balreth with guardian atronachs.
"The atronachs? Well … that's bad. I banished them when I cast Father's spell.
We were sure we could control the creature. Damn it. I suppose we'll have to summon them again, somehow."
How do we do that?
"They stood watch over Ash Mountain for centuries. All we need to do is grab their attention again. Kill Daedra, take their hearts, then burn them at the ruin altars. That should draw them out.
Walks-in-Ash is waiting for you at the top. Good luck!"
I'll get started.
"We'll hold the line here, ensure that the Ashlands are safe. All of Stonefalls is relying on you, my friend."

Why are the Daedra here?

"Normally Daedra only grudgingly come to Nirn. But Ash Mountain resonates with the magical echoes of Balreth's capture. That power, and the heat of the lava, draws them in. Like moths to a flame."

Why weren't you able to shackle Balreth?

"Father … may have been overconfident. We broke the wards and, as you learned, dispelled the guardians when we summoned Balreth to Davon's Watch.
Father was sure I'd be able to replace them. I don't want to let him down."

Garyn Indoril will accompany you into the caldera of Ash Mountain when you go to finally imprison Balreth once and for all. He will aid you with his magic during combat.

Garyn Indoril: "To me! Draw Magicka from my aura."

Garyn Indoril: "Now, summon the guardians! Touch Balreth's prison to draw them in."

After being summoned for the last time to bind Balreth within Ash Mountain, Ragebinder and Blaze turn on you. Before they have the chance to burn you and Garyn to a crisp, the spirit of Mavos Siloreth, the one who originally bound Balreth, appears to save you.

After Balreth has been imprisoned:

"We did it! We walked into an inferno and emerged unscathed. We defeated a Brother of Strife!
This is worthy of an epic... or a monument in Mournhold!"

"On to Ebonheart, yes? The Covenant is retreating here, but there's lots of fighting still ahead."

You can find him inside the manor at Ebonheart alongside his father Tanval, Walks-in-Ash and Holgunn. He is not instrumental to the quest, but you can ask him some questions.

"Welcome in the name of the Three. How do you like Ebonheart?"
Are you fond of Ebonheart, Garyn?
"I spent much of my childhood here, living with my mother's family.
Some of my fondest memories are of playing with my father on the shores of the bay. I learned to fight with the troops in the square."
Do you know how the recovery effort is going?
"In the wake of Balreth's rampage? It goes well. Senie will be rebuilt, and the ash from the volcano will actually help the farms, at least in the long run.
It's been hard, but Daen Seeth will prosper."

When you report to Garyn, he sounds stressed, and speaks in a hushed voice.

"By the Three! Good to see you again, my friend."
How can I help?
"From what my spies tell me, General Serien sent most of his forces to Vivec's Antlers He shouldn't have the strength to hold Fort Virak, but he's repelling our attacks again and again.
I have an idea of how he's doing this. I don't like it."
How can I help, Garyn?
"You're the only one I trust. Go to the front lines. I know this sounds gruesome, but I need you to inspect the bodies of the Covenant troops after they fall.
Bring me anything ... well, unusual. And keep this between us. I don't want any panic."
I'll investigate.

"Head to the front line. See what you can find. We'll speak when you return."

Returning to him with the evidence:

"Did you find anything suspicious?"
The soldiers fighting our troops were ... rotting.
"Now you can see why I had you investigate. I didn't want to panic my troops.
After each day of fighting, we've allowed the enemy to collect their dead, out of respect. Serien is raising them at night to face us again the next day."
How do I put a stop to this?
"That old lizard, Walks-in-Ash, came to me with a plan to infiltrate the fort. I told her it was too risky. Now we're fighting a losing battle.
It's time to take a risk. Walks-in-Ash and an elite squad are in the ruins under the fort. She'll explain the rest."

Speaking with him after this conversation:

"Walks-in-Ash is waiting for you inside the ruins. Hurry!"

In the courtyard after the Pact has taken back the fort:

"This is amazing. What a historic moment! And we have you to thank for it."

"This is grim business, but I'm proud to fight by my father's side."

After the ward on the door is removed:

Garyn Indoril: "The ward has been dispelled. Go find Serien. We'll join you as soon as we've recovered our strength."

Speaking to Garyn before entering the keep:

"Father and I have broken the ward on the gate. Get in there, my friend."

Garyn Indoril: "We've done it! The general is dead!"
General Serien: "No! I must not fail!"

The General then kills Garyn in a last-ditch effort to take something from the Pact.