This article is about the bone colossus. For the Chimer general, see General Balreth. 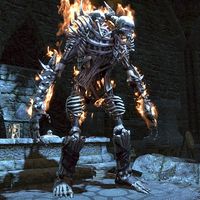 Balreth is one of the Brothers of Strife, a bone colossus with magical fire attacks. He was created out of desperation by Chimer wizards in the First Era. Balreth became a menace to Stonefalls, and was ultimately imprisoned within Ash Mountain.

In life, Balreth was an ancient Chimer general during the Battle of Red Mountain in the First Era. With Stonefalls occupied by the Nedes and the Chimer army cut off from reinforcements, grim prospects awaited the army. Balreth and his brother Sadal, along with a small force of elite troops and sorcerers, decided to retreat to an ancient Daedric ruin. It was here that they sacrificed themselves and became the Brothers of Strife. They transformed themselves into powerful bone colossi. Although their sacrifice ended the war, the brothers went on a bloody rampage, killing both Nede and Chimer alike. Balreth was ultimately defeated and imprisoned within Ash Mountain.

You will need to aid House Indoril in summoning Balreth to Davon's Watch to defeat the attacking Covenant army. After the battle is won, you will be required to travel to Ash Mountain to defeat Balreth and restore his wards.

Balreth has the ability to summon scamps, whose fireball attacks can be a serious hindrance to players taking him on solo. He has a large amount of health and will heal if lured near a lava pool. He makes use of a large area of effect attack but can easily be outpaced. The rain totem acquired during the related quest freezes Balreth in his tracks, but has a lengthy cooldown.

This Elder Scrolls Online-related article is a stub. You can help by expanding it.
Retrieved from "https://en.uesp.net/w/index.php?title=Online:Balreth&oldid=2402128"
Last edited on 2 May 2021, at 10:06