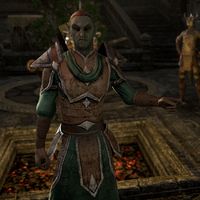 Tanval Indoril is the Grandmaster of House Indoril and leader of the Vanguard. He served alongside Holgunn in the Akaviri War.

Tanval is present during many quests throughout Stonefalls.

"Holgunn said you were reliable. I trust his instincts.
And I know there is much work to do."
Holgunn's told me about the siege. How can I help?
"The Covenant closes on us like nix-hounds on a kill. They think they've already won the city.
They're entirely wrong. They are doomed to the last man."
What's the plan?
"You are the plan. There's a relic beneath the city guarded by spirits of my ancestors. For me to fight them would be blasphemy, but you aren't of House Indoril.
The entrance is through the tombs across the square. Bring the relic here."
What can you tell me about the relic?
"Only that you need to bring it. I tried to reason with my ancestors, but they do not understand our peril.
You must succeed where I cannot."

Speaking to him after this exchange:

"Enter the tomb, retrieve the relic, and return to me."

Returning with the Skull of Nam Indoril:

"Did you recover the relic?"
I was attacked by an enraged spirit. He said you would destroy us all.
"That was one of my ancestors. He refuses to recognize the threat facing us today.
It's time to turn the tables on the Covenant. For that, you must buy me some time."

"I need time to prepare a ritual that will bring this to an end.
We have to delay the Covenant troops to the south."
How can I buy you some time?
"With my ancestor's skull, I have a powerful weapon—the ultimate weapon! I just need a little more time."
What do you need?
"Ask Holgunn. He's commanding the defense of the west gate.
If you need a guide, speak to Garyn."
I'll find Holgunn.

Speaking after accepting the quest:

"Go to the west gate and help Holgunn. Garyn can show the way."

At the Indoril tomb, Tanval will be performing the ritual he was preparing for earlier.

As soon as Tanval starts his summoning, Covenant troops begin pouring into the room:

After Balreth has left the premises, Tanval turns to you, exhilerated. He opens a portal and directs you to it:

Tanval Indoril: "You there! I will cloak you in shadow. Enter the portal and witness our victory."

"You have brought credit to your house. This is a great thing.
House Indoril will always speak well of your actions here today."
We've won the day?
"Our victory is complete. Even now, the Covenant retreats. You gave me enough time to summon Balreth.
As grandmaster of House Indoril, I honor you."

Before the quest, Tanval will say:

"Balreth has done its job. The Covenant has been driven from Davon's Watch!
Now to put it back where it belongs: in the depths of Ash Mountain."
What needs to be done?

"I'm not exactly sure. I made us of ancient rites and secret lore to wrench him from his cell. You saw the conclusion of my efforts. My able son Garyn even now works to return him to his slumber. He will guide your hand."

Where should I go?
"You'll find Garyn west of the city, on the slopes of Ash Mountain. I sent a detachment of soldiers with him to ensure his safety. I'm certain he already knows what needs to be done."
I'll report to Garyn, then.

"You've done well here, soldier. You're a credit to the Pact. I'm certain you'll be of use to my son."
Can you tell me more about Balreth?
"Balreth is one of two ancient magical juggernauts, the Brothers of Strife. Their story is too long to tell now. It is enough that Balreth is a powerful weapon at our command."

You can find him at Furon Rii's camp in Starved Plain, across from Strifeswarm Hive. He will recognize you if you've already helped him at Davon's Watch, but haven't dealt with the situation on the plain.

"Ah, you again! I'm sure there are uses for your skills here."

"Surveying the battlefield? There will be many more.
The Covenant has only retreated. Now we must drive them out."

You can find him inside the manor at Ebonheart alongside his son Garyn, Walks-in-Ash and Holgunn. He is not instrumental to the quest, but you can speak with him.

"Vivec guide your steps, soldier."
How goes the war?
"We're holding them. In some places, we're barely holding on, but we're holding them.
But I wish I hadn't invoked the Brother of Strife."
You regret summoning Balreth?
"I do. I wish I hadn't been needed here. I should have aided the effort at Ash Mountain.
The Brothers depend on old magic from another time. They have no place in Stonefalls today."

Tanval appears at the end of the quest, after the Pact retakes the courtyard at Fort Virak. Speak with him to end the quest and start the next one.

"The yard is secure. Once again, the Pact controls Fort Virak.
Yet General Serien still lives. Where is he? He has much to answer for."
General Serien is in the keep. He's turning soldiers into zombies.
"That Covenant general is a monster. Thank you, soldier. We'll ensure the dead rest peacefully."

"The courtyard is ours. Now all that remains is to cut off the snake's head."
I'm ready to finish this.
"We can't let General Serien finish his ritual. Garyn and I are ready to dispel his wards.
Get ready for a fight, soldier."
What will I face beyond the gate?
"You'll face the dead. I don't know how he's doing it, but Serien has transformed our warriors into undead slaves.
Once the ward is down, enter the gate. Make your way to the keep and confront General Serien. We'll join you as soon as we can."
I'll put an end to General Serien.

After the ward on the door is taken down:

"All right, the ward is down. That was harder than I thought.
We're right behind you. Get in there!"

When Tanval enters the keep to help you finish off the general, he'll yell:

After General Serien's death, Garyn Indoril is killed. Tanval is distraught, and steals the Coral Heart from Holgunn before fleeing.

Garyn Indoril: "We've done it! The general is dead!"
General Serien: "No! I must not fail!"

The General then kills Garyn in a last-ditch effort to take something from the Pact.

You will find Tanval injured on the ground, being tended to by Walks-in-Ash high within the Spire.

"My friend. I see you've come to stop me. Thank Vivec you're here."
How were you wounded, Tanval?
"Daedra, down in the caldera. We tried to push past them
We failed. I'm lucky to be alive."
You can't unleash Sadal on Stonefalls. It's madness.
"I know that now. Sadal summoned the Daedra the moment we arrived.
Even with the artifact, I can't control him."
How do we get to Sadal?
"One final ward remains. Your key won't work. To disable the ward, you'll need to slay an ancient gatekeeper lurking in the caldera. Summon her at the ritual bowl below us.
And listen: I'm sorry, my friend."
I'll see it done.

"The gatekeeper is the only thing standing in our way."
Why did you do it, Tanval?
"You know why, my friend. The death of my son, Garyn. I couldn't bear it.
Vivec knows, when I was younger, I had trouble with my anger. It still plagues me."
I thought you understood after what happened with Balreth.
"Yes, I should have known. The destruction near Davon's Watch, my dishonorable orders to the Vanguard, my shame at Fort Virak ... I will never be able to atone.
I'm sorry, my friend."

After taking down the final ward:

"The mages who first imprisoned Sadal linger here. The portal to Sadal's realm will not open without their aid.
I believe they are angry with me."
How do we placate these spirits?
"Speak with them, my friend. Perhaps you can earn their trust. One awaits you on the platform in the center of the caldera.
Vivec walk with you."
I'll speak to the spirits.

Speaking to him after starting the quest:

"I brought this threat about. I know that now. I hope I can help stop it before it's too late."

Before placing the Focus Stones:

"It's amazing what you've been able to accomplish."

After the portal is open, Tanval and company appear. Speak to Tanval to end this quest and begin the next.

"You've done it! By the Three, you've done it!"
The portal is open.
"Holgunn, Walks-in-Ash, the Vanguard, and myself. We'll follow you to Oblivion and beyond.
Garyn trusted you. I only wish I had done the same."

"A word with you before we enter the portal."
Of course.
"We're here because of me. So many have died. I've shamed myself and my house.
There's no guarantee we'll survive what comes next. Whether we do or not, you must promise me something."
If I can do it, I will.
"If I survive, I'm resigning my position. After me, Holgunn is to be the commander of our forces in Stonefalls.
The Houses will have to promote another Dark Elf to my old position. Until then, Holgunn is the only one I trust to safeguard the Pact."
I'll tell him, Tanval. Now let's see this done.

Speaking with him after starting the quest:

"Let's enter the portal. I long to be done with this."

From here on out, most of Tanval's dialogue is through conversations in the world as opposed to sharing face-to-face dialogue with the player.

Another ward blocks you path. Tanval speaks again once the ward is down.

Tanval instructs you to stay out of Sadal's fire as he takes down the beast's protections.

When Sadal regains his flaming ward after the first phase:

Tanval Indoril: "Fall back. I need a moment to rest."
Holgunn: "Cut those skeletons down. Don't let them reach Tanval."

After Sadal is defeated and you've spoken with Walks-in-Ash back on Tamriel, Tanval's spirit appears outside the entrance to the Tormented Spire.

"Honor to you, my friend."
Tanval? Grandmaster?
"I had to say farewell. The honor of my House has been restored, Stonefalls is safe, and soon, Garyn and I will be side by side.
May the Three watch over you."
And you. Farewell. 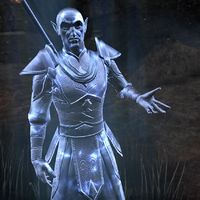 The spirit of Tanval Indoril can be spoken with at the entrance to Tormented Spire at the end of Sadal's Final Defeat.