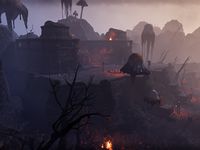 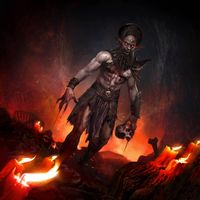 Kogoruhn (meaning Unbroken Home in Dark Elvish)[1] is a ruined stronghold found in the northern Ashlands of Vvardenfell that served as the capital of House Dagoth in the First Era. It is virtually surrounded on all sides by numerous mountains and rocky slopes, including Red Mountain towards the south, and is found near the ruins of Valenvaryon and Ebernanit. Its location has often been considered lost to time by the Dunmer people, and the Ashlanders consider it a bad place.[2] It is called Kogoran in the Nordic book the Five Songs of King Wulfharth and sometimes called Lost Kogoruhn by the Temple.[3][4]

Voryn Dagoth, wanting the Dwemer as dead as the Tribunal did, went to Kogoruhn and summoned his House chap'thil to the Battle of Red Mountain, made up of wizards, archers, nix-hounds, and stolen automatons.[3] Following the Battle of Red Mountain and the defeat of Voryn Dagoth in 1E 700, House Dagoth was dissolved and its remaining members were absorbed into other houses, resulting in Kogoruhn being abandoned.

During the First Akaviri Invasion, a Failed Incarnate of the Nerevarine named Idrenie Nerothan traveled to the ruined Kogoruhn to loot it, and perished during her attempt.[5] Later on around 2E 582, descendants of the Sixth House formed a cult and attempted to revive the ancient House, setting up operations in the area around Kogoruhn known as the Forgotten Wastes. They set up excavations in the caverns and ruins beneath the stronghold, led by Wakener Maras and Mountain-Caller Hlaren. The cultists' leaders were slain and their plans foiled by the Vestige and an Ordinator named Tythis Nirith.[6]

Dagoth Ur later reawakened in 2E 882 and made plans to establish a major operational base at Kogoruhn to expand the Sixth House and set up further operations in the ash wastes. By 3E 400, the Ash Vampire Dagoth Uthol reoccupied the stronghold, fortifying it and using it as an advance base. As a result, The Blight proceeded to become more widespread and soul sickness spread in regions close to Red Mountain, furthering Dagoth Ur's goals.[7]

In 3E 427, the Nerevarine traveled to the citadel. By then, many members of the Sixth House occupied the stronghold, and extensive tunnels that traveled past the Ghostfence had been made. Dagoth Uthol was slain, with Dagoth Ur soon following, ending House Dagoth's presence.[8]