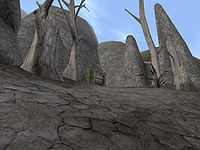 Kora-Dur is a cave inhabited by the unique daedroth Menta Na.

It's located in the northern Ashlands just east of Kogoruhn. It is a cave full of powerful Daedra - mostly daedroths, with a storm atronach as well.

Menta Na's master, the Daedra Prince Molag Bal, has a grudge against him and wishes him slain, as you can find out upon visiting the Daedric shrine of Yansirramus, on the western edge of Zafirbel Bay. 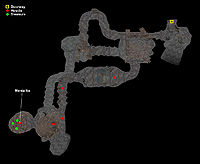