The Dark Elf Ashur has come to Hakoshae to investigate Magnate Feina-Darak. Rumor has it that she's the descendant of the Akaviri Potentate. I agreed to help him in his investigation.

Set your paper lotus in the river

Along the road to Hakoshae, you'll come across Ashur, a Morag Tong assassin who is investigating rumors that the town's leader, Magnate Feina-Darak, is a direct descendant of the Akaviri Potentate. Ashur's grandfather was supposed to have assassinated the Akaviri Potentate's last living heir. If the Magnate truly is descended from the Potentate, Ashur's family's reputation will be sullied. Ashur requests that you ask the Magnate a few questions about herself while he conducts an investigation of his own.

Enter the village. As you approach the Magnate, you'll find her having a conversation with Domitia Nasica. Domitia seems worried about something, and the Magnate reassures her, telling her that the guards will investigate her problem tonight. Speak with the Magnate. The town's Proving Festival is going on today, and she asks if you'll be taking part. She explains that the people of Hakoshae prove their worth to their ancestors during the festival by completing three trials, known as the Three Proofs. The Proof of Reverence calls calls on the ancestors to witness your deeds, the Proof of Strength displays one's might and bravery, and the Proof of Wisdom tests one's knowledge and will. The Magnate tells you to speak with Domitia down by the river for the first trial. This is the first time since the village's founding that the Proving Festival is being held. The Magnate found old documents describing the festival, and decided that it would be nice for the villagers to reconnect with their ancestors. She isn't quite sure why the festival hasn't been held since the town's founding year.

Head southwest and find Domitia Nasica by the river. She recognizes you from earlier, and happily tells you about the first trial. You need to write the names of your honored ancestors on a Paper Lotus and place it into the river, allowing it to float into the afterlife. Before you can prove yourself to your ancestors, you must first get their attention. The paper lotus is like a calling card of sorts. The Akaviri believe that all waterways connect the realm of the living and the dead.

Speak with Domitia after you set the lotus afloat. She mentions that the Proof of Strength is next, but is too exhausted to tell you more about it. She hasn't been getting very much sleep at night lately due to the presence of strange noises. She sends you off to see Vek-Drassi Secunia for your next trial. Head west across the river and speak with him. To the north lies a cave where sugar daisies grow. The cave is home to a pride of hungry senche-lions. Bring Vek-Drassi a Sugar Daisy to prove your strength to your ancestors.

Head northwest and enter the cave. The cave is a little ways away, about halfway between Hakoshae and Scar's Edge. When you approach the pair of senche-lions sitting in front of the daisy, three weaker lions will appear. After you defeat all of the lesser lions, a powerful senche-lion will appear from his den and attack you. Defeat the last lion and pluck the sugar daisy, then head south back to Hakoshae and give Vek-Drassi the flower. He tells you your ancestors must be very proud of you, then goes on to talk about how it's good that they are, detailing Akaviri beliefs on the ancestors. Displeasing one's ancestors can lead them to punish you, with the most egregious offenses warranting a spirit to kill their kin.

With the second trial complete, it is time for you to head southeast to see Valoria Marius for the Proof of Wisdom. You have to solve a riddle for this trial. There is a table across from Valoria (next to the stone pavilion in the center of the town square) with three objects on it: a Bowl, a Candle and a Potion. You need to bring Valoria the object best described by her riddle:

"I am most useful when empty, I am most generous when full. What am I?"

The bowl is the correct answer. You can put many things in a bowl when it's empty, and when it's full, you usually take things out of it. The bowl is generous; it allows you to take its contents. It can't be generous when it has nothing in it, but you can put more stuff in it in that state. Valoria is glad you were able to solve her riddle. She mentions the Magnate, and how her ancestors are a little harder to live up to than most of Hakoshae's residents.

When you're done speaking with Valoria, you'll turn around to find Ashur standing behind you. Talk to him. He asks you what you've learned about the magnate so far. Her family has led Hakoshae since its founding, and she's scholarly and well-respected by the village. Everything you've learned seems to support the rumor that the magnate is descended from the Potentate, but Ashur requires more concrete evidence to be sure of it. A document would suffice for such proof. Magnate Feina-Darak apparently keeps a good number of documents in the cellar beneath her manor. You should break in and begin your search there. Ashur says that you'll need a key to get in, and that the captain of the guard should have one. Ashur asks that you chat up Captain Verus while he picks the man's pockets. 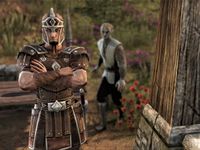 "Who knows what misfortune would befall me?"

Head up the path leading up the hill where the magnate's manor is located. Captain Verus is on the right-hand side of the path, standing watch. He spills his guts to you as Ashur sneaks up behind him, grabs the key, throws a smoke bomb and disappears. The good captain is worried about dishonoring his ancestors. The first two trials were easy for him, but he had a hard time solving the riddle during the Proof of Wisdom. When you're done talking to the captain, head southwest towards the cellar door, located to the right of the manor. Enter the cellar.

The door to the magnate's History Vault is blocked by a red barrier. In the center of the room is a stone dais with four slots in it for what appear to be tablets, judging by the shape. There's a chest to the east, which you'll need to search. Inside are four tablets. There is a book on the table near the dais titled Tale of the Elements. It gives you a hint as to how you should place the Tablets in the dais:

Enter the History Vault once you've gotten the door open. Read the letter on the magnate's desk. It's from her mother, who tells Feina-Darak that she is descended from the Potentate. The magnate's mother warns her to keep her lineage a secret, as the Morag Tong would see her as a loose end that needs to be tied up. Which Ashur does; he says that it's a pity the magnate is an actual descendant of the Potentate as he pulls out his dagger. After you read the letter, the magnate enters the cellar and demands that you leave. Before anything can happen between the assassin and the magnate, an Akaviri Spirit appears, and angrily admonishes the magnate for "daring to claim to be part of his lineage". The spirit opens a portal and drags her through it. Talk to Ashur.

The Magnate is taken by a spirit

Enter the Hakoshae Tombs. The magnate and the spirit are just up ahead, but the spirit opens another portal and pushes the pair deeper into the tomb. The spirit seemed to recognize Ashur, who thinks this is a case of mistaken identity. Ashur notes that he looks a lot like his grandfather, who was supposed to have assassinated the last of the Akaviri Potentate's bloodline. At this time, you and Ashur will split up.

Navigate the tomb. From the first chamber, you'll head east, then north, then east, take a left turn to head north, then head west down the northernmost hallway to enter the . If you can't stealth your way past, you'll need to defeat a few of Hakoshae's ancestor spirits as you travel through the linear halls. In the large northern chamber, you'll encounter the Shade of the Founder. You need to defeat him in order to advance. He'll summon two spirits when his health falls to 50%. He is desperate to keep you from learning some sort of truth. Once he's dead, move on to the Founder Chamber.

The Magnate gives a speech

The spirit has bound Magnate Feina-Darak, and Ashur is facing him. Ashur identifies the spirit as Proconsul Beloren-Kaie, last potential heir of Potentate Savirien-Chorak. The spirit beckons you to speak with him. He confirms his identity, and explains that he was indeed killed by the Morag Tong, but he managed to mortally wound his assassin before he died. The Proconsul's bodyguard, Lieutenant Lein-Barduik, fled when the assassin came calling, and looted Beloren-Kaie's corpse in the aftermath. The Lieutenant went on to found Hakoshae, not the Akaviri Potentate. Magnate Feina-Darak is descended from this Lein-Barduik, whom claimed Beloren-Kaie's name. Lein-Barduik summoned Beloren-Kaie during Hakoshae's first Proving Festival by writing his name on a paper lotus and setting it in the river, just as Feina-Darak did this year. Having his name written in a paper lotus and set afloat is what allowed Beloren-Kaie to return on both occasions. Back in the day, Lein-Barduik cast the Potentate's spirit away when he was compelled to come forth, and the Proving Festival was never held again... until this year. The Magnate found the records of the festival, and, thinking Beloren-Kaie her ancestor, wrote his name down on her paper lotus, allowing him to return. Proconsul Beloren-Kaie does not wish to kill the magnate, he simply wants her to tell the people of Hakoshae the truth. If she comes forth with the news that she is not a descendant of the Potentate, then Proconsul Beloren-Kaie's spirit can finally rest.

Speak with the magnate about all of this. She agrees to tell her people the truth about the Potentate. Leave Hakoshae Tomb with Ashur and the magnate, then head back into town and go to the town square to speak with Ashur. He rewards you for assisting him with his investigation. You can linger after the quest to witness Magnate Feina-Darak's speech. She reveals that her true ancestor was a traitor to the Potentate, revokes her title as magnate and offers to exile herself. The town, however, loves Feina-Darak, and insists that she remain their magnate. Proconsul Beloren-Kaie is relieved that he is avenged, and fades away.