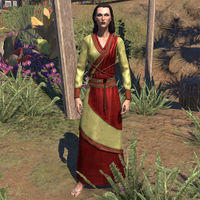 Magnate Feina-Darak is the Imperial leader of Hakoshae, who is speculated to be a descendant of the Akaviri Potentate. A Morag Tong assassin has arrived in the town during the Proving Festival to investigate these claims.

After receiving the quest from Ashur, approach the center of town and you'll hear the following:

Speak to the Magnate and she'll welcome you to the town:

"Welcome to the town of Hakoshae. I must say, it is not often I see a new face.
Have you perhaps come to take part in our festival?"
A festival?
"The Proving Festival, yes.
Through a series of trials, the people of Hakoshae must prove themselves to their ancestors. We do so by completing three trials, otherwise known as the Three Proofs."
Can you tell me about these Three Proofs?
"First, the Proof of Reverence calls on our ancestors to witness our deeds. Second, the Proof of Strength displays our might and bravery. Lastly, the Proof of Wisdom tests our knowledge and wit.
Through these trials, we show our worth."
I'd like to join this festival, if I may.
"Of course. I'm sure you too have ancestors you wish to honor.
First, you must speak with Domitia Nasica. You'll find her just by the river. Listen well to her words, for she will guide you through your first trial."
All right, I'll talk to Domitia Nasica.

You can then ask her some questions:

"Let me know if you have any other questions. I realize that Hakoshae can be quite the curiosity for travelers such as yourself."

I couldn't help but overhear your conversation earlier. Some sort of trouble?
"Nothing to worry about.
Domitia just hasn't been sleeping well. She believes there's something prowling around her house at night. I suspect it to be just bad dreams."

But you're going to have the town guards search?
"Of course. I'd never dismiss a citizen who seeks my aid.
Having the town guards investigate will help ease Domitia's fears. That alone may be enough to stop her nightmares. And if the dreams continue, I'll make sure she's seen by a healer."

Tell me more about your town. / I see. Tell me about Hakoshae.
"Though Hakoshae is known for its Akaviri ancestry, the truth is that our Imperial bloodline runs far richer. Still, we honor our Akaviri ancestors by maintaining some of their customs.
The Proving Festival is a shining example of that."

Tell me about this festival.
"The Proving Festival has not been celebrated since Hakoshae was first founded. I didn't even know it existed until I found a first hand account of the festival in my family's records.
It's been quite the challenge getting everyone up to speed."

Why did Hakoshae stop celebrating it?
"I'm not sure. Perhaps the town just wasn't interested in celebrations when Hakoshae was first founded. They were refugees, after all.
You can read about it yourself, if you're so inclined. I happen to have the book with me."

Can you tell me more about yourself?
"I hold the title of magnate, though I have no emperor who supports me. Still, my family has led Hakoshae since its founding, and chose to take the title to reflect that role.
It has been my honor to lead this town for over ten years now."

Why has your family always led the town?
"Because it was our family who founded it.
My ancestors wished to create a place of safety and peace, where Akaviri traditions could continue to be passed down and honored. A goal I still strive to respect to this day."

I can't help but notice your name. Is it Akaviri?
"Yes, as is my family's tradition. We tend to keep closer to our Akaviri heritage than most. I even speak a little of the language, though I suspect my accent is quite atrocious."

Complete the tasks and enter the Magnate's cellar with Ashur and you'll discover proof that she is a direct descendant of the Akaviri Potentate. She will not be happy about that, and neither will her ancestors:

She will then be dragged through a portal.

After you have entered the Hakoshae Tombs and discovered and spoken to Proconsul Beloren-Kaie, he'll demand you speak to Feina about her ancestor's betrayal:

"I can't believe it. The founder of Hakoshae … my ancestor … he lied?"
That seems to be the case. Will you speak the truth?
"You don't understand. To admit such a horrid truth wouldn't just dishonor me. It would dishonor my entire family.
All of my ancestors, who have done such great things for Hakoshae. They'll all be disgraced. How can I do that?"
So you want to keep lying about your ancestry?
"I … no. No, I don't want to keep lying. The citizens of Hakoshae deserve nothing but my complete honesty, even if it comes at the cost of my family's reputation.
I'll do it. Ancestors forgive me, but I'll tell everyone the truth."
Let's get going then.

Proconsul Beloren-Kaie : "I'll be watching, Feina-Darak. Waiting for you to speak the truth."
Magnate Feina-Darak : "I'll keep my word."

When you arrive back in town, a crowd will be gathered in front of Feina-Darak. Once you have spoken with Ashur, she will address them and reveal her ancestors lies, offering to to go into exile. However, they won't stand for it and demand that she continue to be their leader. The spirit of Proconsul Beloren-Kaie will be satisfied.

After completing the quest and listening to her announcement, you can see how she is. If you return to Hakoshae at a later date, she will be outside her manor home:

"Greetings, traveler. I hope you're doing well."
You seem rather happy, given all that's happened.
"Honestly, I'm still wrapping my head around it all. My entire life I thought that I was a descendant of the Potentate. To realize that was a lie is, well, it's hard.
But I'm still Feina-Darak. I know who I am, and so too do my people."
So you're going to continue to be the Magnate?
"Yes, for as long as Hakoshae will have me.
And even if that changes, I'll still do my best to help this town however I can. This is my home, no matter who my ancestors were or were not. I realize that now."