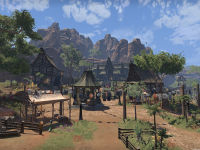 Hakoshae is a town in eastern Northern Elsweyr. The village is located south of the Anequina Aqueduct. It was founded by Akaviri refugees fleeing Cyrodiil after the assassination of the last Potentate and the sudden realization that they were no longer welcome in their long-time home. The ruling family claims to be descended from Versidue-Shae but do not tell anyone who does not belong in Hakoshae due to the Potentate's assassins, the Morag Tong, always watching for potential survivors of the Potentate's legacy.

To the east of the village lies the Hakoshae Tombs. A dog named Pocco patrols the hill leading to the tomb. The Manor Cellar is located to the right of the Magnate's manor, which is located up a hill on the southeastern end of the village. A copy of The Proving Festival is located on a table next to Magnate Feina-Darak. Clever Kail-Perwa and the Great Boast, Volume 1 can be found beneath the stone pavilion in the center of the town square. Pigs can be found foraging in the yard behind Kail-Haraka Artoria. Chickens and roosters live near a coop on the northern side of the village. An intermediate safebox can be found behind Avita Pitio. There is a cat on top of a crate to the left of Bremman Galenus. All of the containers can be looted freely; there are no owned containers, save for the one safebox.

†Appears during related quest in this location

Hakoshae Wayshrine is located outside the village, northwest of Hakoshae.