Start the quest by finding a note from Astara, or by speaking to Grazda at the Gold Coast Wayshrine, south of the Dark Brotherhood Sanctuary:

"Speak with me a moment, Initiate."
What's going on, Grazda?
"Astara sent word. There's a situation in Kvatch that requires immediate attention. Go to the Sanctuary and the Matron will tell you all about it."
I'll go talk to Astara in the Sanctuary.

Once you arrive at the Sanctuary, you'll find Astara speaking to Kor and Hildegard about Akatosh sermonizers in Kvatch, who have been publicly attacking the Dark Brotherhood's reputation recently. Speak to Astara:

"Once again, the pious idiots of Kvatch dare to provoke the anger of the Dark Brotherhood. Such an insult cannot be allowed to stand unchallenged!"
What's going on in Kvatch?
"As if the Grand Sermonizer didn't have enough vices to rage about, now she's preaching against the Brotherhood. She says we are weak, powerless. A toothless dragon that inspires ridicule instead of fear.
These lies must be silenced—permanently."
I can go to Kvatch.
"Be wary. The Order of the Hour has increased its presence in Kvatch. Avoid the warrior-priests if you can.
Meet up with Tanek and silence the priests that speak against us, including the Grand Sermonizer. That will put the fear of Sithis in them."

As you head out of the Sanctuary, you may overhear Kor stating that he also has a job in Kvatch, and that he'll meet you and Tanek when it's finished. For now, go to Kvatch; you'll find Tanek hiding in the bushes near the city's entrance, with an objective marker revealing him to you. Speak to him:

"I was wondering how long it would take you to get here. Didn't Astara instill you with a sense of urgency about this mission? She must be getting tender-hearted after all these years."
Does everything amuse you?
"Yes, I'd say so. I find life to be a complicated series of pranks and pratfalls. Besides, this is your mission. I'm only here to observe and offer assistance if you get in over your head.
Speaking of which, try not to get captured or killed today."
So you're just going to stand around and watch?
"No, that would be boring. You start murdering the Sermonizer's priests while I take on the real challenge. I'll locate her hiding spot. Then I'll find you so we can kill her together.
That will put the fear of the Brotherhood in the Kvatch people!"
What happens if I get spotted making a kill?
"Be stealthy or slaughter everyone that gets in your way. Whichever works best for you. They all wind up with Sithis in the end, so what's the worry?
Now let's get out there and deal with the Grand Sermonizer and her lying priests."
Sounds like we have a plan.

Tanek's advice is actually very poor. While there are a few members of the Order patrolling the city, and they can be killed if you attract their attention, the city is mostly still patrolled by the usual Kvatch Guards, who are virtually immortal. 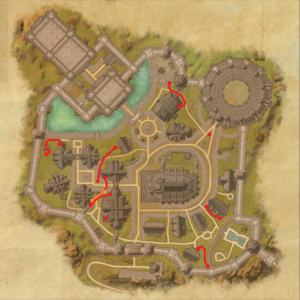 A partial map of Sermonizer positions and patrols in Kvatch. Not all Sermonizers have been mapped.

You need to kill three Sermonizers. They won't be indicated on your map or compass, but you'll be able to see a Dark Brotherhood insignia above their heads as your approach them, and the insignia is visible through walls. Some Sermonizers patrol between street corners, where they give impassioned speeches denouncing the Dark Brotherhood, and more secluded areas, where they are vulnerable. Even when they're giving speeches, there often aren't any guards around, so you can kill them without immediately putting your life on the line; however, civilians do sometimes gather around the Sermonizers during speeches, so they'll witness particularly public kills (causing you to incur a bounty that will last even after quest completion) and they may even attack you in retaliation for murdering a Sermonizer.

Once you've met your quota, Tanek will approach you and inform you that he's located the Grand Sermonizer: she's holed in in an estate outside of Kvatch's walls. You can head directly to her, or kill two more Sermonizers first, as a bonus objective.

Grand Sermonizer Fithia is at the At-Himah Family Estate. Once you enter, you are committed: logging out or otherwise leaving the Estate will reset the quest to this moment.

When you enter, Tanek will order you to head through the upstairs door to the Observation Balcony. You're free to follow him immediately or search the surrounding area for loot first. Once you get to the Observation Balcony, you'll overhear a discussion between the Grand Sermonizer and a woman in black armor, who are standing over a dead body in an Interrogation Hall below you. There's no risk of being detected, so feel free to loot the downstairs rooms to either side of the Interrogation Hall. After the Grand Sermonizer's conversation finishes and she applies some magic to the nearby dead body, she'll step out, and Tanek will beckon you to follow him into the Interrogation Hall. 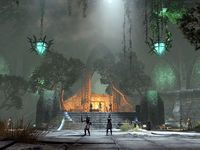 Grand Sermonizer Fithia and her companions are ready to fight you

Once the Sermonizer is dead, proceed forward through the chamber and up a long stairwell. You'll exit through a trapdoor to a safe area north and slightly west of the Estate. Return to the Sanctuary and speak to Astara:

"Kor brought Tanek home, injured but alive. He told me you went after the Grand Sermonizer.
Tell me, has the deed been done?"
The Grand Sermonizer and her priests are dead. We found Cimbar, tortured to death.
"Cimbar was one of our best. To allow himself to be captured like that … I didn't think that either the Grand Sermonizer or the Order of the Hour was capable of such a feat. Why go to all that trouble, I wonder?"
A warrior in black armor captured Cimbar. Said she wanted to learn the location of our Sanctuary.
"Black armor? I've heard rumors of such a warrior. But to seek the location of our Sanctuary? It appears we're at war with an unknown adversary. I need to think about this.
By the way, Tanek woke up and asked to see you."
I'll go talk to Tanek.

You'll find Tanek recovering on a cot, being seen to by Kor and Hildegard. Wait for their conversation to finish, and then speak to Tanek to complete the quest:

"Kor and Hildegard mean well, but they're worse than a couple of mother hens.
You're alive. Does that mean the Grand Sermonizer is no longer with us?"
The Grand Sermonizer is dead. But how are you doing?
"We're not certain what kind of magic the Grand Sermonizer placed upon Cimbar's body, but I'd be dead, too, if not for you and Kor.
I'm indebted to you both."
At least they didn't learn the location of the Sanctuary.
"And I'll make sure that everyone remembers Cimbar's bravery. He refused to give up our secret, no matter what the Grand Sermonizer did to him.
It does make me wonder about the warrior who was able to defeat him, though."
You mean that black-armored warrior?
"Cimbar could easily best me in a fight, and that warrior bested him. If you encounter her again, don't underestimate her skills and abilities.
She's hunting the hunters, and that's a game I have no desire to play."
Is there anything else you need right now?
"A chance to beat your record. How many of the Sermonizer's priests did you murder anyway?
Seriously, New-blade, stay sharp out there. The roots of our trouble stretch deep below the soil. Things are going to get worse, my friend. Mark my words."

The next quest does not unlock until Dark Brotherhood Rank 3, so the Matron suggests you visit Elam Drals, as the Contracts are starting to pile up. Meanwhile, Speaker Terenus has arrived in the Sanctuary and will now offer Sacraments once per day.