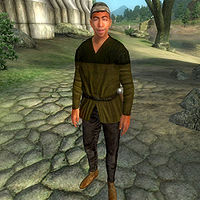 Isleif the Open Handed is a Redguard thief who lives in Jair's shack in the Imperial City Waterfront District. He is also a member of the Thieves Guild. If you talk to him, he will tell you he only shares his fortunes with the poor and needy.

Despite the generous nickname, Isleif shares his limited gold with no one and spends most of his time hanging out on the Waterfront. After waking up at 9am he immediately leaves the shack and wanders around the shack area all day long, preferably near Lake Rumare, interrupted only by a two-hour breakfast in the shack at noon. At 7pm he reenters the shack for a bit of socializing with Jair before he sits down for dinner at 9pm. During both meals, he will not hesitate to go into sneak mode and steal food right in front of his landlord. On all regular weekdays (Morndas to Fredas) he leaves the Waterfront at 11pm and spends the night strolling around in the Temple District. At 5am he returns home, and at 6am he goes to bed. During the weekends, he will change his nightly behavior slightly; on Loredas, he will leave at 11pm as always, but will return home when the clock strikes midnight and wander around until his 6am bedtime. On Sundas, he stays inside the shack until midnight then leaves for the Temple District.

There are a few exceptions to this routine: during Misdirection, Isleif will stay inside while Hieronymus Lex investigates the Waterfront. After The Ultimate Heist, when Dareloth's House becomes available as a hideout for Thieves Guild members, Isleif will break off his routine and enter the basement between 8pm and 4am on weekdays, 8pm and midnight on Loredas and, when Sundas turns into Morndas, between midnight and 4am.

Isleif wears a lower-class outfit consisting of a dark green shirt, blacksmith's pants, and a pair of huntsman moccasins. He also carries a fine iron dagger to defend himself, the key to Jair's shack a small amount of gold.

Speaking to Isleif will have him greet you with "They call me Isleif the Open-Handed. Because I'm so generous... Well, don't expect a handout from ME. You certainly don't need it.". Asking him about the Imperial City will have him elaborate on his generous nature "I share my good fortunes with the poor and needy. And you ain't neither. Life isn't easy on the waterfront. But we look out for each other."