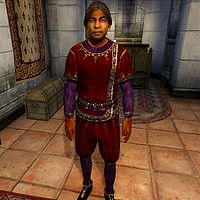 After the bad experience with the Guard Captain, Ruslan wisely stays away from the Market District and lives a rather monotonous life in the big city. He always wakes up at 6am and starts the day with a two-hour breakfast. Additionally, at 5pm on all days, he will visit the Tiber Septim Hotel in the Talos Plaza District for a three-hour dinner followed by a bit of wandering in his house before his bedtime at 10pm.

On regular weekdays (Morndas to Fredas), Ruslan leaves his house at 8am and pays his good friend Luronk gro-Glurzog a visit until 1pm, when he returns home, doing absolutely nothing until his dinner at 5pm. On Loredas, he relaxes on the ground floor until 10am, then heads to the Green Emperor Way where he spends four hours strolling around. He returns to his house at 2pm and stays there until his dinner at 5pm. On Sundas, he will do exactly the same but will skip the trip to Green Emperor Way and stay inside all day. There are a few exceptions to this daily routine; after you have spoken with Itius Hayn and convinced Ruslan to testify, Ruslan will break off his regular routine at 8am and actively seek out Itius Hayn in the Elven Gardens District; afterwards he will stay put in the Talos District, until Audens Avidius is arrested. He will then resume his regular routines. Also, during the final stages of Light the Dragonfires, martial law will hit Ruslan as well, and he will barricade himself in his house while the Temple District is in a state of chaos.

He wears a set of upper-class attire, a pair of gold trimmed shoes, a red velvet blouse, and matching garments. He also carries his house key and a decent amount of gold.

On the streets of the Imperial City, you may hear rumors about a crime committed in the Market District: "Did you hear what happened to Ruslan and Luronk? One of the Watchmen fleeced them for all their coin!" and "Ruslan and Luronk are going around saying that some of the Imperial Watch are corrupt." Getting close to Ruslan will cause him to ask: "Can I ask you a favor?" When you approach him, he will plea for a mere amount of gold and will mention the incident: "Hey stranger, can you spare a few coins? I've just been shaken down by that bastard watchman and he took my last septim." You can choose to tell him that you are poor yourself, which will cause him to say: "I don't get paid until tomorrow. I guess I'll just have to wait to eat 'til then." If you give him the three coins, he will gain a +5 disposition boost and thank you in typical beggar-fashion: "Blessings of Akatosh upon you!" When asked about the incident, he will say: "I don't know his name, but I'd recognize him if I saw him again. Luronk and I were shopping at Jensine's when he accused us of stealing. Even Jensine said we were innocent, but he didn't care. We had to pay his "fine" or go to jail. He's shaken down most of the shopkeepers in the Market District. They're all too afraid of him to do anything. Jensine wouldn't even talk about it. Someone ought to do something about him." The quest will now be initiated; however, when asked about the Imperial City, Ruslan will still reply: "You're very curious. Perhaps too curious for your own good." If you approach him again, his greeting will be different: "Have you seen my friend Luronk? I'm worried about him." He will bid you farewell using one out of three possible statements: "Take my advice. Stay away from the Watchmen.", "I'm going to keep a low profile for a while." or "Damn Watchman. I bet they're all crooked."

When you confront his friend Luronk about the incident, he will basically tell you the same story: "Ruslan and I were shopping at Jensine's when he accused us of stealing. We turned out our pockets to prove we were innocent, but he didn't care." When you approach Jensine she will angrily reply: "Ruslan and Luronk. Those idiots don't know when to stay quiet." Raising her disposition accordingly will not help much but she will identify the corrupt Guard as Audens Avidius. If you talk to Ruslan at this point, he will be quite nervous: "I've heard that you've been asking around about that corrupt guard. Just don't mention my name. I have enough problems." After you have tracked down the righteous Itius Hayn, it is time to get Ruslan to testify against Audens Avidius. At first, a surprised Ruslan will say: "You want me to testify against Audens Avidius? You're crazy. Exactly how do you intend to persuade me to do that?" After some good persuasion, Ruslan will agree to come forward: "You've convinced me. If I don't stand up to him, who will? I just hope I'm not committing suicide." If you convince him between 8pm and 8am he will add: "I do it first thing in the morning." Regardless of your timing, Ruslan will always wait until next morning to testify. At 8am, he will actively seek out Itius Hayn who will be in the Elven Gardens District. If you get near him during this small trip, he will say: "I'm on my way to talk to Itius Hayn." If you approach him afterwards, he will say: "Luronk and I have both testified against the Watch Captain, Hayn. Thank you for helping us find the courage to stand up for ourselves. I hear that Audens Avidius is going to jail. Let's hope its [sic] a long sentence."

A few weeks later, a vengeful Audens Avidius will escape from prison. When he seeks you out and attacks, he will scream: "First I'll kill you. Then I'll get Ruslan and Luronk. You'll all pay for what you did to me."