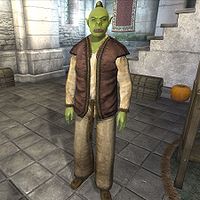 Luronk gro-Glurzog is an Orc commoner living in the Imperial City's Temple District. Luronk, along with his friend Ruslan, was recently harassed by a corrupt Watch Captain, but he is too scared to step forward. During Imperial Corruption it is up to you to stop the harassment and convince the scared Orc to testify.

He sleeps in the bed in his house's private quarters from 10pm to 6am and then eats breakfast in his main room for two hours. He spends most of his time wandering around his home, but on weekends he goes for a walk in the Arboretum from 8am to 8pm. On Morndas at 4pm, he will head to the Market District and stay until 8pm instead. There are three exceptions to this schedule. First, along with all other citizens of the Imperial City, Luronk will stay in his house during the finale of the Oblivion Crisis - the closing stages of the Light the Dragonfires quest. Secondly, once you have convinced him to find Itius Hayn, he will seek him out at 8am the following day. Luronk was also part of the Unfinished Quest having to do with Couriers. On the 16th of each month, as long as Hafid Hollowleg is still alive, he will head to the Black Horse Courier office in the Market District at 12 noon, stay there briefly, then return to his regular schedule.

His wardrobe consists of typical middle-class garments: a brown shirt, light brown linens and pigskin shoes. He also carries a medium-sized amount of gold and his key.

When you first greet him, he will ask you for some money: "Hey stranger, can you spare a few coins? I've just been shaken down by that bastard watchman and he took my last septim." You can give him three coins at that point, which he will greatly appreciate: "Blessings of Akatosh upon you!" If you tell him you don't have any, he will be disappointed: "I don't get paid until tomorrow. I guess I'll just have to wait to eat 'til then." You can also deflect his question by asking him about the Corrupt Imperial Watchman instead: "The bastard took every coin I had with me. I don't know his name, but I know his face. Ruslan and I were shopping at Jensine's when he accused us of stealing. We turned out our pockets to prove we were innocent, but he didn't care. We had to pay the "fine" or he was going to march us off to jail." When you ask him why Jensine hasn't reported him, he'll explain: "He's shaken down most of the shopkeepers in the Market District. They're all too afraid of him to do anything. Jensine wouldn't even talk about it. Someone ought to do something about him." This will start the quest Imperial Corruption if it hasn't started yet. Additionally, you may hear citizens of the Imperial City rumor about the incident: "Did you hear what happened to Ruslan and Luronk? One of the Watchmen fleeced them for all their coin!" or "Ruslan and Luronk are going around saying that some of the Imperial Watch are corrupt." If you'd like to hear what he has to say about the Imperial City, albeit very little, you must do so before starting the aforementioned quest: "I'm quite behind on current events, I'm afraid. I can't be of any help to you." He will bid you farewell using one out of three possible statements: "Take my advice. Stay away from the Watchmen.", "I'm going to keep a low profile for a while." or "Damn Watchman. I bet they're all crooked."

Jensine won't tell you anything about the incident with a disposition lower than 70: "Ruslan and Luronk. Those idiots don't know when to stay quiet." After successfully having spoken to Jensine about the corrupt guard, Luronk will greet you with fear: "I've heard that you've been asking around about that corrupt guard. Just don't mention my name. I have enough problems."

After having convinced Ruslan to testify, his greetings will still contain fear of Watchmen: "These days I get nervous whenever I see a Watchman. Maybe I'll just stay inside." Ruslan will express concern over him, when you greet him before having convinced them both to testify: "Have you seen my friend Luronk? I'm worried about him." In order to convince him to testify against Audens Avidius, you will need him to have a disposition of 70 or higher, otherwise he will refuse: "Testify against a Watch Captain and accuse him of corruption? I don't think I'm willing to risk doing that." When he accepts between 8am and 8pm, he'll say the following: "This may be the stupidest thing I've ever done, but I'll testify against Audens Avidius. I suppose someone has to stand up to him." Between 8pm and 8am he'll add the following: "I'll find Itius Hayn first thing in the morning." In both cases, he will seek out Itius in the Elven Gardens District at 8am the following day. If you get near him during this short trip, he will say: "I'm trying to find Itius Hayn." After testifying, Luron will resume his regular routines.

Later on, a vengeful Audens Avidius may be heard yelling out: "First I'll kill you. Then I'll get Ruslan and Luronk. You'll all pay for what you did to me."