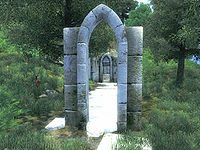 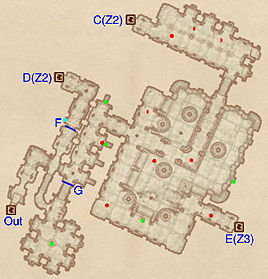 After entering, turn right and unlock the gate at G to access a room with a minor loot chest and seven Welkynd stones. These are all found on raised pedestals so you will need arrows, area-effect spells or a high Acrobatics skill level to either knock them off or reach them. The corridor departing from this room leads to a gate which can only be opened from the other side: it is a quick route back from Edesel via door D.

Return to the previous intersection, fight your way past an undead, loot the two minor chests and you'll arrive in a large room. Take care as you may end up fighting up to four enemies at the same time. The room has two levels but there is nothing of note in the lower apart from a minor loot chest so stick to the upper and make sure to collect the eight Welkynd stones that ring the inner perimeter. Only one is on its original base, the others are on the ground near their pedestals. For more efficient exploring, enter Ceyede via door E.

Once you've cleared that zone, backtrack and proceed along the causeway. The final room holds up to three enemies, so be ready for a fight. Collect the five Welkynd stones high up on their pedestals and enter Edesel via door C 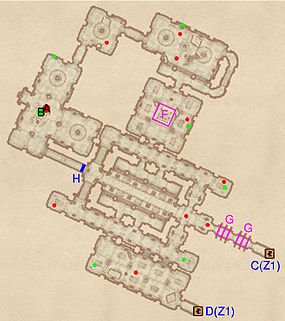 As you enter from door C you will be immediately confronted with an enemy - try to use the swinging blades at G to dispatch it. There is another enemy on a raised corridor just after the trap which will likely detect you, so stay put until it arrives so you can use the blades to your advantage once more. The next room has eight Welkynd stones on easily-accessible pedestals. You will then be presented with a three way junction: the secret door at H will have opened so you can proceed straight through it to access the boss chest at B, a minor loot chest and high-placed Welkynd stone, which are all guarded by a boss undead (A).

Alternatively head to the right to gain access to three minor loot chests. In the first room, you can use the spike pit trap at F to help you dispatch your enemy. You can avoid activating the trap by walking across its corners. You then arrive on a balcony overlooking another room; this is a good place to snipe at the enemies below. Once you've reached the boss chest room you can return to the original three-way junction and head to door D which leads conveniently close to the exit. Make sure you don't miss the minor loot chest in last room, it is found tucked behind the first stone slab you encounter.

This zone is very simple and only consists of two rooms. In the first you will find an undead guarding two minor loot chests and six Welkynd stones high up on pedestals. Don't miss the chest hidden behind the middle pedestal on the room's right-hand side. The next room contains a boss chest (B), two Varla stones (V) on easily accessible pedestals, four Welkynd stones scattered on the floor and two minor loot chests. The room is guarded by a single undead boss (A).