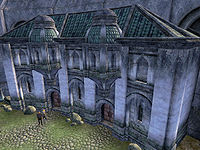 Two doors in the southwest of the district lead into the two rooms on the main level. The second floor is the barracks, and the basement is below. 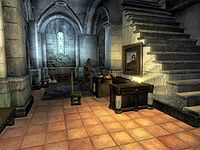 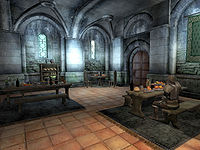 The southern door leads into the dining area, where a food cupboard and two clutter sacks sit in the northeast corner. Three clutter barrels sit in the southeast corner at the foot of the stairs, along with five more clutter sacks. Another two barrels, a chest, and a sack beside the stairs also all contain clutter. Two more clutter sacks sit on the steps, with a clutter chest and another two clutter sacks at the top beside the door to the barracks. The southernmost table here is set with five potatoes, four tomatoes, three apples, two carrots, two cheese wedges, a loaf of bread, and four bottles of cheap wine. A set of shelves on the west wall holds ten blackberries, six cloves of garlic, four loaves of bread, and three heads of lettuce. The door to the basement is in the southwest corner, below the stairs. A round table in the northwest of the room is set with two apples, two cheese wedges, two tomatoes, and a loaf of bread. The other table in the northeast of the room holds five tomatoes, four carrots, four potatoes, a cheese wedge, and four bottles of cheap wine. Only the sacks are non-respawning.

The northern room on this level holds the desk used in the Permanent Retirement quest, which holds on top of it three strawberries, an apple, a loaf of bread, a cheese wedge, a bottle of Surilie Brothers Wine, and the Imperial Legion Seal used in the Taking Care of Lex quest. The chest beside it can hold up to three pieces of armor and three weapons, with a chance of one of each being enchanted. On top of it sits a clutter sack, a bottle of cheap wine, and another of Surilie Brothers Wine. Three clutter sacks sit in the southwest corner beside a desk with the same contents. The door to the basement lies in the northwest corner, under the stairs. At the top of the stairs, a chest of drawers holds more clutter, sitting beside the door to the barracks. Only the large desk and the sacks are non-respawning. 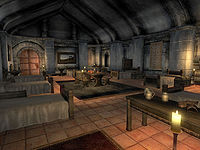 The southern stairs into the basement hold a barrel, a chest, and two sacks on the first landing, all with clutter. Another two sacks lie on the lower portion of the steps. At the foot of the stairs sits another clutter barrel, and three more sit against the east wall. Two chests hold more clutter at the foot of the northern stairs, and the northwest corner holds four barrels, three sacks, and two chests, all containing clutter, along with a grain sack. Two more clutter barrels and another two clutter sacks lie against the west wall. In the southwest corner sit another two barrels, two crates, and two sacks, all containing clutter. A final clutter barrel and two grain sacks sit near the southern support column, with another grain sack sitting next to the northern support. Only the sacks are non-respawning.

† Adamus Phillida will retire and move to Leyawiin at the beginning of Permanent Retirement.
‡ Giovanni Civello will be Adamus' replacement.