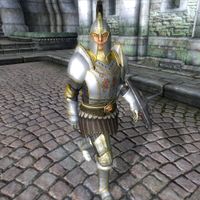 Giovanni Civello is an Imperial guard patrolling the Imperial City. After Adamus Phillida retires in Leyawiin during the quest Permanent Retirement, Giovanni succeeds Adamus as the Imperial Legion commander. After that, in an edition of The Black Horse Courier, Giovanni describes Phillida as having been his mentor and vows to continue Phillida's fight against the Dark Brotherhood.

Giovanni Civello begins his day at 6am when he wakes up on the second floor of the Bastion. After waking up he will head to the Imperial Legion Offices where he sits around all morning, afternoon and evening, without doing any duties, because of a bug. At midnight Giovanni Civello will head back to the Bastion and go to bed. While martial law is in effect during the quest Light the Dragonfires, Giovanni will run back to the Prison District and stand near the doors to the Imperial Legion Offices.

Giovanni wears a full set of Imperial Watch armor. He is armed with a silver longsword and carries a set of lower class clothing and a small amount of gold.