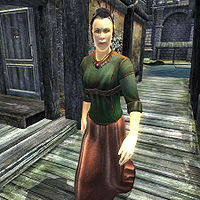 Hlidara Mothril is a High Elf noble working in Castle Leyawiin as Countess Alessia Caro's chaplain and advisor. She supports Alessia's political stance and takes her function very seriously, to the point where she follows Alessia everywhere from the moment she wakes up until she goes to sleep. However, during the Thieves Guild quest Ahdarji's Heirloom it becomes apparent that even she cannot stomach the controversial ways of dealing with non-human races in the Castle Leyawiin dungeon.

Her room is located in the northeastern part of the private quarters and she sleeps there every night between midnight and 6am. After waking up, she immediately seeks out the Countess, who will stay in her quarters until 8am. Hlidara will then follow Alessia to her throne in the County Hall and will stay by her side for five hours, also when Alessia decides to randomly seek out her friend Mahei between 10am and 1pm. At 3pm, she will escort the Countess and her bodyguard on a daily four-hour trip to the Great Chapel of Zenithar. They leave the Chapel at 7pm, in order to reach the castle before the traditional formal dinner starts at 8pm. When the Countess leaves the table at 11pm, Hlidara follows her up to the private quarters for one hour of wandering, before they both go their separate ways and find their beds at midnight. On Turdas, when the Countess visits Mahei at 6pm for a four-hour meal, Hlidara will patiently wait outside Mahei's front door until she returns to the Castle at 8pm for dinner. The only exception to this schedule is during the Sanguine quest, when she will patiently wait next to the dining Countess all day long and only sleep between midnight and 6am. This behavior goes on until you have cast the Stark Reality spell. If Alessia dies, Hlidara will have nobody to follow and, as a result, will stay in bed all day long and only get up for the 8pm dinner. She will keep eating until midnight, then head back to bed.

On the 15th of every month, Hlidara will, after waking up at 6am, quickly seek out Alessia to accompany her on her monthly trip to visit her mother, Countess Arriana Valga of Chorrol. Both Hlidara and Alessia will take the trip by foot or on horseback (see Notes) and their arrival time will depend on what they choose. Unfortunately, Alessia also suffers from a huge amount of bugs during this trip and so will Hlidara; the two of them will often find themselves trapped in a loop and travel back and forth between Chorrol and Leyawiin. If they somehow manage to stay in Chorrol until midnight, Hlidara will sleep in the Castle Private Quarters for seven hours. At 7am on the 17th, they will return to Leyawiin.

Hlidara wears middle-class clothing consisting of the rare zero-weight forester's shirt, a pair of tan linens, quilted shoes, and a leveled piece of unenchanted jewelry. She carries a useful raft of castle keys and a small amount of gold.

She, along with some other citizens, thinks that Alessia's policies are well intended as she says when you first meet her: "I am Hlidara Mothril. Lady Leyawiin's chaplain and chief advisor. I assist Her Ladyship so that her enlightened policies might achieve the greatest possible influence upon the affairs of County Leyawiin." When asked about Leyawiin, she will express even more approval for Alessia's policies and how they ought to transform Leyawiin into a more Imperial influenced county: "Leyawiin is a state in transition. It has long been a respected country making moderate cultural and economic contributions to the Empire. However, Leyawiin must move towards the mainstream of Imperial culture, both in political and economical affairs".

She is your main informant during Ahdarji's Heirloom quest, telling you about a secret passage beneath the Castle and Alessia's daily schedule. During the quest many people will direct you to her in order to find out more about the Countess, though you will have to sweeten her disposition towards you if you want her to spill the beans. On the topic of the Countess' recovered ring she will provide a wealth of information: "Countess Caro is so relieved to have the ring back. It's been missing for many years. She wears it constantly. Well, not all the time. I mean, she puts it in her jewelry box for baths and at night. No proper lady would wear her jewelry to bed" and on the topic about Alessia's daily schedule she will inform you that: "Mornings she is at the town chapel. At the castle, she hosts the evening meal at eight. She retires sometime after eleven. She travels to Chorrol on the Ides of every month. Don't even try to find her between the 15th and the 17th." Although she approves of Alessia's political ideas, she is not so happy about her torture chamber, as she will express when she informs you about its existence: "Shh! It's too dangerous to be heard talking about that. The Countess has a secret passage somewhere in the basement that leads to her private quarters. That's where the torture chamber is. Sometimes I can hear the screams of the prisoners in my chambers."