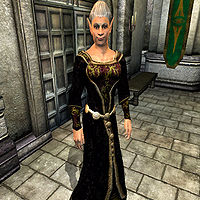 Dagail in the Leyawiin Guild Hall

Dagail, a Bosmer battlemage, is a Wizard of the Mages Guild who offers master training in Mysticism and is the head of the Leyawiin Guild Hall. She is a powerful mystic who often speaks of cryptic premonitions, and without a certain amulet, she is plagued by thousands of voices and unable to concentrate on anything. Finding that amulet will be your task during the Leyawiin Recommendation quest.

She is very much a scholarly mage and will spend a good part of her day studying. She sleeps in her private quarters on the top floor of the guild building from midnight to 8am. Until midday she will be found reading the common text A Life of Uriel Septim VII while sitting down on one of the two benches in the entry hall. After eating a two-hour lunch in the ground floor dining room, she will spend the next four hours reading again and will then pace restlessly around the guild building until 8pm. After eating a two-hour dinner with her fellow guild mates she will spend the last two hours of her day wandering around sleepily until it is time for bed again. She will offer her services as a Master Trainer when not eating or sleeping.

She wears upper-class attire consisting of a black & burgundy outfit and a pair of gold trimmed shoes. She also carries her copy of A Life of Uriel Septim VII, the common text A Children's Anuad, and a sizable amount of gold. She doesn't wield any weapons, relying instead on a leveled set of spells from all of the magical schools but Illusion.

If you approach her before having joined the Guild, she will share one of her many premonitions with you:

"Greetings, child. The Mages Guild has a future for you, I believe. I have seen it. You should consider joining."
Join the Mages Guild
"The guild is accepting new members, but it may require some hard work on your part. Are you sure you wish to join?"

If you decline she will be disappointed:

I'm not interested.
"As you say. Perhaps fate will return you to us, someday?"

If instead you accept, she will promote and welcome you:

Yes, I want to join the guild.
"Welcome, child, to the Guild of Mages. You shall be called Associate by all. Recommendations you need, from all guild halls in Cyrodiil. None will be easy to acquire. Too many motives, too much noise. May luck be with you, and may your wisdom guide you well. The Arcane University will need your help someday. I have seen it."

You can now ask her about the Arcane University, Leyawiin, and the Guild:

"Within its walls live those who determine the fate of the guild. It is our stronghold, our sanctuary. You will come to know it well, in time. I have seen it."

"The guild needs you, child. Perhaps it has always needed you; always been waiting for you."

The next time you meet her, she will give you the following cryptic plea for help, which will start the recommendation quest:

"You seek wisdom from me, child? Ah, no. You seek words. Words are... difficult. They come and go. The voices, though. So loud they are, they drown out the words. Without my amulet, my stone to lock the voices away, the words will never come and stay. Would you lift your hands to help another, to help me find the words?"

No, I don't think so.
"A pity, but not unexpected. We shall speak again."

If you accept, she will point you towards Agata:

Yes, I'll help.
"Then seek Agata, child. She will see the path, and set you on it. I must rest."
Agata
"She may be young, but her heart is old and wise. It guides her well through these troubled times."

Should you approach her before having talked to Agata, she will say:

"Nothing has changed, child. The voices still cry out, and I am unable to hear. If they can be sealed away, our work may begin."

Talking to Dagail after talking with the other guild members will show she is getting worse:

Visions
"Too many voices, too loud in my head. How can I hear when all are shouting?"

When you approach Dagail after speaking to Agata, she already knows your question:

"You seek more from me, child? It is as I have seen. I know what you would ask. You would bring light to that which is in darkness, bring silence to the voices so loud. I know where you must go. Blood ran blue, and dragons flew high. Under broken towers and broken bodies it now lies, waiting to be found. What was my sire's must be mine, if you would have the words you seek. You must go and find his stone."

After Kalthar's demise, Dagail will be overwhelmed with joy when you hand her the new amulet. She will also give you one final premonition:

Seer's Stone
"Found it, have you? Silenced the hands that betrayed, and took what was mine? Then let me have the stone, so that the voices can be shut out. Ah, child. I thank you for helping me. With the voices quieted for now, the words you seek have come to me. You shall have my... recommendation. Though I must warn you. I have seen things in your future. Things which may be, and things which will be. It will be up to you to decide the fate of many. Life and death are strange things, easily manipulated, and both will be altered by your hands."

If you speak to Dagail once you have obtained all recommendations she will say:

Recommendation
"Your time has come. The Arcane University needs you, child. Raminus Polus waits for you even now. Great things will befall you. There will be trials, but you will prevail. You must, for the good of the guild."

After the quest, the townsfolk will start saying: "I understand that Dagail is in much better control of her faculties now that Kalthar's plot has been exposed." The citizens will also share an odd rumor about Dagail being interested in sheep: "Dagail has been training high ranking mages more about mysticism. And he's [sic] also been researching sheep, from what I hear." and "I've heard that Dagail knows a lot about Mysticism. And sheep." Others will simply reply: "I've heard he [sic] knows more about Mysticism than almost anyone. Strange about the sheep, though." and "I don't understand the fascination with sheep. Certainly seems to know everything about Mysticism, though." Prior Maborel of Weynon Priory will tell you that Eronor is related to Dagail (see notes): "Surprised by Eronor's uncanny way with sheep? Perhaps it would interest you to know that Eronor's sister, Dagail, in Leyawiin, is an accomplished spellcrafter."