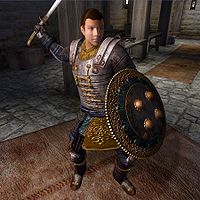 Ferrum is a Breton Blade residing in Cloud Ruler Temple, the haven of the Blades found in the Jerall Mountains north of Bruma.

While the other Blades spend the majority of their waking hours guarding the Temple, Ferrum practically lives in the Temple Armory, tirelessly building up his sword skills on the training dummy in the southeastern corner of the room. After 4 hours of sleep on his mat in the East Wing, at 6am he heads for the armory and pulls out his katana as soon as he arrives. He will continue to hack away at the dummy for a whopping thirteen hours; taking a one-hour break at midday and relaxing on the nearby stool. After another hour-long breather, at 8pm he starts to pace around the Armory until his late bedtime at 2am.

Ferrum wears an almost complete set of Blades armor, including a cuirass, shield, boots, greaves, and gauntlets. In combat, he wields an Akaviri katana. Before going to bed, he un-equips his armor and slips into a more comfortable brown shirt and light brown linens. He only carries whatever clothing he is not wearing and a small amount of gold.

Upon being greeted, he will always tell you he's too busy to speak with you and will point you to other Blades with one of these three randomly selected rejections: