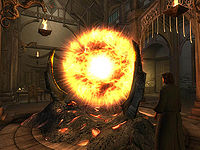 The portal to Paradise

Go to Cloud Ruler Temple and find Martin ready to open the portal to Mankar Camoran's Paradise. He warns you that the portal will close behind you once you enter. Tell him that you are ready and he will open it. Go through as if it were an Oblivion Gate.

You will hear Mankar Camoran's voice in your head; however, you can more or less ignore it. Follow the broken white path through the garden but, beware of leveled daedra, until you find the Dremora Kathutet. Unlike other Dremora, he will not attack you on sight; he has heard of your exploits and deems you worthy to speak to - no small honor among the haughty Dremora. Since Kathutet holds no loyalty to Camoran, he is willing to help you proceed if you provide a service to him. He has the Bands of the Chosen, which you will need to enter the Forbidden Grotto, which lies between you and Camoran. You can get them several ways. You can simply kill him and loot the Bands from his corpse. Alternatively, you can accept the task he gives you, which requires travelling to a cave (follow map marker) and knocking out two logs holding a boulder back that has trapped the Xivilai Anaxes. If you kill Anaxes, you will find Kathutet where he was before; he will become hostile and you'll be forced to fight him. However you choose, carry on until you reach the Forbidden Grotto. Camoran will continue to talk to you. Fight your way through, then put on the Bands of the Chosen when you get to the exit. If you have freed Anaxes, Kathutet will meet you here to give you the Bands of the Chosen. You can now enter the next area.

The Bands of the ChosenEdit

Once in the Grotto, you cannot leave while still wearing the Bands of the Chosen, but you cannot remove them yourself. Fight your way through the Grotto, and eventually you will be approached by Eldamil, an Altmer Mythic Dawn Agent. Eldamil has grown disillusioned with Camoran's vision, and will offer to remove the bands if you tell him that you plan to kill his master. Eldamil will ask you to act like his prisoner. Soon a Dremora (Orthe) will approach and test your prisoner-like qualities. You will be told to step into the nearby cage to be lowered into the lava river. Your trust in Eldamil was well placed, as he won't lower you into the magma. You will be raised back up and Eldamil will tell you to meet him in the next area where he will remove your bands, as he cannot cross the lava himself. Meet him there and he'll do just that. He might die (maybe killed by Orthe himself), but it doesn't matter: he's as immortal as the other creatures in this Paradise. Alternatively, you can just attack and kill Orthe when he begins to talk with Eldamil. You're now able to escape through the next door and back into Paradise. Eldamil will continue to follow you through the remainder of the quest.

Follow the path to Carac Agaialor (Camoran's Palace). If you stray too far off the path you'll be warped back to the door you just left. Going down the path, you'll meet Mankar's children, who will tell you they've been expecting you and that their father is waiting for you. They will lead you to their father's throne room, where Camoran himself awaits you with the Amulet. He will enter a long monologue about how the Septim Dynasty has ended and the coming of Dagon cannot be stopped, and that you are powerless against him in his Paradise. Listen if you're interested, otherwise you can start the fight any time by attacking.

You will have to face Mankar, Raven, and Ruma all at once. Raven will summon Mythic Dawn Armor and a bound sword to attack you, while Ruma will stay back and use her staff (a random leveled destruction staff) at range. If Eldamil is still following you, he will aid you in the battle, hopefully keeping at least one opponent distracted. If killed, Eldamil, Raven and Ruma will all reappear a few seconds later, as they are immortal. The only way to end the battle is to kill Mankar.

Mankar himself is very powerful. He possesses a variety of innate abilities and magical gear imbuing him with resistance to Magic, Frost, Shock, and physical attacks, making him vastly more resilient than a typical opponent. He is a Master of Conjuration magic and will summon powerful leveled Daedra, and he has a variety of other magic, including Silence, strong healing spells, and Disintegrate Armor and Shock Damage spells cast by his staff. He also has a fairly large amount of health, and his robes have reflect damage and spell absorption enchantments on them so use caution when attacking him.

Focus on Mankar, unless you want to loot the others, because they'll keep respawning until you kill their father. It is possible to kill them before entering the area with Mankar. They will still respawn, but this will buy you a little time in which you will have two fewer people attacking you.

As soon as Mankar is dead, Raven, Ruma, and Eldamil will all die instantly and Paradise will begin to collapse. After a short while you will be teleported back to Cloud Ruler Temple. During that time you can loot Mankar's body for his staff and enchanted robe if you want (but you don't need them to complete the quest). When you get back you'll have the Amulet of Kings in your possession (even if you didn't loot it).