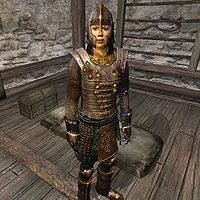 Caroline is a Breton Blade who resides at Cloud Ruler Temple in the Jerall Mountains north of Bruma.

Caroline is one of the three guards entrusted with the duty of guarding the front door, which she does from 4pm until she is relieved by Cyrus at midnight. She then moves on and patrols the interior of the temple for eight hours before finally sitting down in the east wing for a meal at 8am. At midday, she will find a mat in the west wing and sleep until it's time to guard the front door once again. The only exception to this routine occurs during the Weynon Priory quest as you arrive at Cloud Ruler Temple with Jauffre and Martin. At this time, Caroline will be one of the six Blades standing in line in the courtyard, ready to lift her sword and salute her new emperor.

Caroline wears the usual set of Blades armor, including a cuirass, shield, boots, greaves, and gauntlets. In combat, she wields an Akaviri katana. She sleeps in a stitched green shirt and coarse linens and carries a small sum of gold.

If you ask her about the temple, she will assure you that it is perfectly safe: "There's no place more secure in all of Cyrodiil. I just wish... I wish we could have gotten our Lord Uriel here...."

Caroline may occasionally greet or be greeted by Martin. If she greets him, Martin says, "Caroline, a good day to you. Or is it evening?" Meanwhile, if he greets her, he says, "Caroline. Don't let me keep you." Furthermore, like the other Blades, she may engage in a lengthy conversation with Martin.