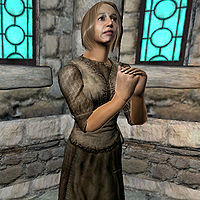 Etira Moslin is an Imperial trader and the proprietor of Moslin's Dry Goods in the infamous settlement of Hackdirt. She is related to Hackdirt's founder Irlav Moslin, and she was the one who found Irlav's copy of the Bible of the Deep Ones. She managed to translate the runes within, leading to the kidnapping and planned blood-sacrifice of Seed-Neeus' daughter Dar-Ma.

On the surface, Etira lives her life as a typical merchant with the usual opening times between 8am and 8pm, even though she is incredibly hostile towards anybody but the townsfolk. After closing up shop, she heads for the Chapel of the Brethren where she recites passages from the Bible for the other cultists, Natch Pinder, Jiv Hiriel, Marlena Brussiner and Vlanhonder Moslin. At 1am, the whole group leaves the Chapel and finds a convenient entrance to the caverns underneath Hackdirt. Down there, the Hackdirt Brethren await them and they all spend five hours worshipping the Deep Ones before going their separate ways at 6am. For the remaining two hours before opening, Etira wanders around the ground floor of the main trading room. If she detects you while trying to rescue Dar-Ma, she will immediately flee due to her low aggression.

With a Mercantile skill of 100, she might be one of the toughest merchants in Cyrodiil, but her hostility has not provided her much wealth. She wears a set of typical lower-class attire consisting of a coarse linen shirt with matching linens and rough leather shoes. She carries around the Hackdirt key and a small amount of gold.

When you meet her for the first time, she will give you one of three random Hackdirt greetings (basically telling you to leave town as soon as possible) or simply just treat you like dirt. She proves a bit more talkative when you ask her about Hackdirt: "We scrape by, not that we've ever had nought but trouble from outsiders like you. You'd best be moving on, if you know what's good for you." When you ask her about Dar-Ma, she will more or less deny everything: "I don't know any Dar-Ma. If you're talking about that cursed Argonian swindler from Chorrol, I'd like to know where she is, too. She never showed up. How am I supposed to run a shop without any merchandise? You tell her I want half off on my next delivery." Confronted with the fact that Dar-Ma's horse Blossom is stabled in her own backyard, she will claim it is her own horse: "I already told you, she never showed up. That's my horse. Owned it for years. Now either buy something or get out."