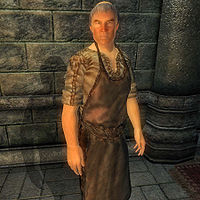 Eitar is a Nord smith working at The Dividing Line in Leyawiin. He offers repair services, as well as basic training in Armorer, but he doesn't sell anything. He is married to Margarte, who is seemingly annoyed by his hobby; stirring up trouble between the Khajiit and Argonian residents in town.

The marriage seems to be quite dysfunctional, as the couple rarely spends time together and even sleeps in separate beds, on separate floors, in Margarte's big house opposite the Chapel. Eitar sleeps in the upstairs area every night between midnight and 6am and always starts the day with a two-hour breakfast at the Five Claws Lodge. On all weekdays (Morndas to Fredas), his workday at the Dividing Line starts at 8am and he spends the next 12 hours offering his various services to customers. At 8pm, on rainy days, he returns to the house, but if the weather is clear, he ventures outside and takes a two-hour stroll near the store. He always finishes the day at the Five Claws with two-hour snack before bedtime. On weekends, he breaks off his routine quite a bit and never even shows up at work. On Loredas, after his breakfast, he heads home and wanders around on the ground floor all day long, leaving Dividing Line proprietor Tun-Zeeus alone in the store. On Sundas he will do exactly the same, except for a two-hour visit to the Great Chapel of Zenithar at 8am. On both days, at 8pm, he will take his usual weather-dependent walk downtown and finish off the day at the Five Claws. Eitar will never offer any services during weekends, but will be available on all other days from 8am to 8pm.

Eitar wears a lower-class outfit consisting of a blacksmith's apron, huntsman leather pants, and a pair of clogs. He carries the key to Margarte's house, as well as a few pieces of gold.

The other residents of Leyawiin know what he has been getting up to and will ask: "Did you hear Eitar stirring things up again?" or "Have you seen Eitar making trouble again with the Khajiits and Argonians?". Even his wife is getting tired of his antics. When she needs help finding ingredients, she will say in disgust that: "And heavens forfend that my husband, Eitar, devote a few minutes from his all-consuming hobby... stirring up trouble between Khajiits and Argonians, to help me find ingredients."