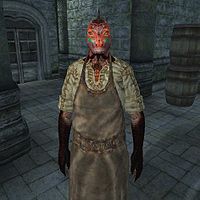 Tun-Zeeus is an Argonian smith and the proud owner of the shop The Dividing Line established in Leyawiin.

He is very keen on maintaining the Dividing Line's popularity among the people of Leyawiin, to the extent that he never leaves the building. He sleeps in his private quarters in the upstairs area, every night between 10pm and 4am. After waking up he will roam around the main trading room for four hours, anxiously waiting for the opening time at 8am. After unlocking the door he will, along with his apprentice Eitar, offer his services to the occasional customer for twelve long hours. The unique Destarine's Cleaver can only be purchased here. After a hard days work he will close up shop at 8pm, and take one last relaxing stroll around the shop until his bedtime at 10pm.

Tun-Zeeus' outfit consists of the typical blacksmith's apron, combined with the matching pants and a pair of rough leather shoes. He also carries the key to his shop and a small amount of gold.

He is very proud of his profession and his shop, as he will express when you first meet him: "The Dividing Line between a live hero and a dead one is a sharp sword. Get the best you can afford from Tun-Zeeus...Because you don't want to be on the dead guy side of the line, do you?" If you inquire about the city, he will tell you that besides of his daily duties in his shop, he is also in charge of forging equipment for the town guard: "I make all the weapons and armor for the guard. Damn good stuff. Pop you open like a ripe melon."

The local Blade trainer, Sherina, is also well aware of Tun-Zeeus' smithing abilities: "If you need a blade, go see Tun-Zeeus at the Dividing Line. Does repairs, too. He does go on and on, sometimes. But he's the Genuine Orc in Leyawiin." The townsfolk of Leyawiin also agree that Tun-Zeeus is a very good smith, as they will occasionally comment: "The Dividing Line is a good place to buy a sharp blade. Of course, you're likely to hear some of Tun-Zeeus' stories if you hang around" and "I've heard Tun-Zeeus has some fine blades at the Dividing Line. Of course, he'll talk your ear off about them if you let him."