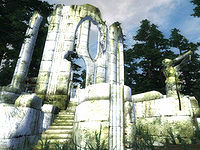 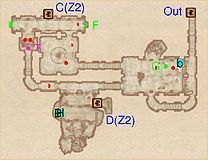 You will enter this zone at the entrance (Out) and work your way through to door C to reach the remainder of the dungeon. The only notable obstacle along the way (besides the usual enemies) is the cave-in trap at T, which can be avoided by using the other (northern) corridor to get from the main room to the exit. The southernmost room in this area, containing a waterfall, boss-level Ayleid Cask (B), and dead treasure hunter (H) can only be accessed using the underwater door at D from Ceyatatar Gorigarlas. The unreachable upper part of the waterfall contains nothing of value. 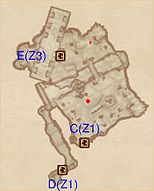 You enter this small zone through door C, and door E provides access to the third and final zone of Ceyatatar. In the middle of this area is a water-filled trench. At the western end of the trench is a tunnel that leads to a previously unreachable area in the first zone (D); it requires swimming underwater, but can be done without Water Breathing abilities. This gives you access to a small room with a waterfall, containing a boss-level Ayleid Cask and dead treasure hunter.

You enter this zone through door E (unless you stumbled upon the trap door prematurely, in which case you enter through the exit at Out and only have access to one small chamber; see notes). To exit through the trap door at Out you will have to open the hidden door at I using the adjacent "Press Block" (cyan dot). This zone contains three prisoner cells, all of which are locked. The turn handles outside of the cells do not open the doors; they only release poison gas (traps T) into the captives' cells. Opening the cell gates at H and K may be worthwhile for the Dead Captive and Ayleid Coffer, respectively. However, gate J does not provide access to any items.