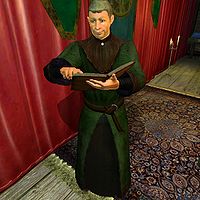 Alberic Litte, a Breton mage, is an Associate of the Mages Guild who offers advanced Conjuration training and sells spells at the Chorrol Guild Hall.

After waking up at 7am, he spends one hour in the guild basement before starting his daily activities. Between 8am and 6pm he will be found reading a book from the guild library, although he will break off at 11am to spend two hours with his wife Carmen in their house. At 6pm, he eats a three-hour dinner with his fellow guild members on the second floor of the Guild hall. He will spend the last three hours of his day wandering around the basement before bed at midnight.

He wears very peculiar mix of lower and upper-class garments: the cheap but rare green robe and the costly green velvet shoes. He also carries his house key, a Mages Guild key, his book, and a sizable amount of gold.

He doesn't wield any weapons, relying instead on a set of low-level spells from all of the magical schools. These are also the same spells that you can buy from him cheaply since his Mercantile is a mere 7. He will be available for both his spell-selling and training services when not eating, sleeping or taking his trip home.

When you first approach him, he will greet you by saying: "I am Alberic Litte of the Mages Guild. I am pleased to make your acquaintance." And he will point you towards Athragar for spells: "If you're skilled enough, Athragar has a rather powerful frost spell for sale. Very effective, but dangerous to the inexperienced." Although he doesn't comment on his ability in Conjuration, his wife will do it for him: "Are you a student of the Arcane Arts? My husband, Alberic, is an Advanced Trainer in Conjuration at the Mages Guild."

During the Fingers of the Mountain quest, he'll give you some information about Earana and Teekeeus' relationship, as well as their personalities: "She's nothing but trouble. She went to the University long ago, but was expelled from the guild. Caused all kinds of trouble while she was there. I think Teekeeus was the one who finally blew the whistle on her. That'd be just like him too; always playing by the rules." Furthermore, he gives a clue to what this quest might be all about: "Doesn't that have something to do with the Ayleids, and magical control over the weather? I think that's the rumor I heard."

As an advanced trainer, Alberic can provide you with the necessary reference for the Conjuration Master Training quest. Once your Conjuration skill level reaches 70, speak to him, and choose the "training" option, which will trigger the quest and this dialogue: "I've heard that there's a powerful conjurer off in the woods someplace, worshipping Molag Bal. Olyn Seran, I think his name was. I personally wouldn't go looking for him myself, but you might keep it in mind if you ever run across him."