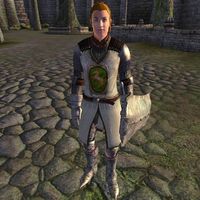 Caelia Draconis is one of Perennia Draconis' daughters and is captain of the Leyawiin Guard. According to her mother, she "broke so many hearts when she was younger. But now that she is an officer in the Imperial Legion I'm afraid she's let herself go a bit. Not gotten fat! By Mephala, not that! But she's settled into a more... practical kind of look. Even a bit boyish, I guess you could say."

She can be found in the Three Sisters' Inn everyday from 7am to 3pm, in a private room on the second floor. She sleeps from 3pm to 6pm at the Leyawiin watch barracks and then from 6pm to 7am she patrols Leyawiin, working the night shift.

When greeting you, Caelia will joke around, saying; "I'm Caelia Draconis, Captain of the Leyawiin Guard. I hope we will not meet in my official capacity... ha-ha." Afterwards, she may also ask "Right, what can I do for you, citizen. [sic]" If you ask her about Leyawiin she will tell you "I came to Leyawiin after a tour in the Legions. Poor Mother. She hoped I'd choose the chapel or civil service, or perhaps even marry well." Upon leaving conversation, she will warn you by saying; "Move along, citizen. I won't abide loitering."

Once the quest Next of Kin has started, Caelia's greeting will change to "Yes? Is there something you need?" after which you get three different options which will end the conversation. If you choose to stay silent she'll impatiently say "Hello? Did you hear me? I asked if you needed anything. Well then, I've got duties to tend to, so if you'll excuse me." You can also tell her that she looks like her mother, to which she'll reply surprised "My mother? Oh, do you know her? She's such a sweet woman. I've been a terrible daughter I'm afraid. I simply must visit more often! Anyway, I have duties to tend to. If you see my mother, tell her I'll visit soon! I promise!" You could also be blunt and state that you need her to die, which will make her attack you as well as net you a 1000 bounty. "Oh, do you now? Well then, far be it for me to deny you such a reasonable request. Guards, I need assistance! This person is resisting arrest!"

After the kill, the Leyawiin townsfolk can be heard saying: "Oh, how horrible! You know Caelia Draconis? That nice Watch officer stationed at the castle? She's been murdered!"