The UESPWiki – Your source for The Elder Scrolls since 1995
< Morrowind: People / Merchants / Trainers
Jump to: navigation, search 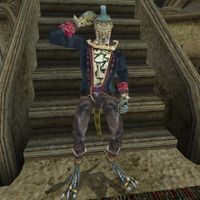 Tongue-Toad is an Argonian savant and a member of the Thieves Guild at The Rat in the Pot in Ald'ruhn. For some reason, Lorbumol gro-Aglakh at the Vivec Fighters Guild wants him silenced, but you can convince him to flee instead and Lorbumol will be none the wiser. Tongue-Toad will also donate 1 or 5 coins (depending on Disposition) to the Imperial Cult for Buckmoth Alms. He is one of the people you can talk to if you have a price on your head and would like it removed. He is also a medium trainer in Athletics and a minor trainer in Alchemy and Unarmored.

Tongue-Toad wears an extravagant shirt, an expensive belt with a matching ring, and a pair of common pants. He carries a steel jinksword along with up to 30 gold. Like all Argonians, he is immune to poison, has a resistance to disease, and can breathe underwater; otherwise he knows no spells.