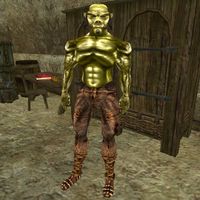 Lorbumol gro-Aglakh is an Orc smith and Champion of the Vivec Fighters Guild and steward to Sjoring Hard-Heart. He can be found in the training area of the Vivec Guild of Fighters, located in the Foreign Quarter Plaza, and offers both bartering and repairing to guild members of Defender rank or higher.

Lorbumol is one of the five people that can grant you admittance into the Fighters Guild and he can also provide you with orders. However, the legitimacy of many of these tasks is questionable. Should you discuss your orders from Lorbumol with former guildmaster Percius Mercius, he will often suggest that you carry out Lorbumol's orders using less violence than what Lorbumol suggests or that you should not follow his orders at all. Percius will eventually reveal to you that the Fighters Guild has been corrupted by the Camonna Tong and he may order you to kill Lorbumol in order to help save the Fighters Guild.

Lorbumol wears common pants with matching shoes. He also carries a dreugh club. Like all Orcs, he has a natural resistance to magicka, and can boost his health, fatigue and attack for short periods, at the cost of agility; otherwise, he knows no spells.

"I have a bounty contract for 500 septims for Adraria Vandacia. She's at one of the Census and Excise buildings in Seyda Neen. There might be some guards around, so watch out." (Starts Vandacia's Bounty)
"You killed her already? Good work. These 500 septims are yours." (If Adraria is already dead before you obtain the orders to kill her)
"Good work. Here's the 500 septims. I got more orders for you." (Once you have killed Adraria)
"Keep following orders and you'll be %PCName the %NextPCRank soon." (After Vandacia's Bounty has been completed)
"You've been expelled, and I don't have to talk to you about any contracts." (If you are currently expelled from the Fighters Guild)

"I don't have any more debtor contracts." (After Lirielle's Debt has been completed)
"You've been expelled, and I don't have to talk to you."

"I got a bounty on this Khajiit outlaw Dro'Sakhar. He's hiding here in Vivec. In St. Olms, I think." (Starts Dro'Sakhar's Bounty)
"So Dro'Sakhar is already dead. You get his bounty then. Here's the 500 septims." (If Dro'Sakhar is dead before you receive the orders)
"I heard you got that Khajiit. Here's the 500 septim bounty." (After you have killed Dro'Sakhar)
"You sure got that Khajiit, %PCRank." (After Dro'Sakhar's Bounty has been completed)
"You've been expelled, and I don't have to talk to you about any contracts."

"You want to join the Fighters Guild? Maybe I got time for you and maybe I don't."
"I guess we need every %PCRank we got."

"Nar gro-Shagramph said he'd get a Juicedaw Feather Ring for our client. Nar says he doesn't have the ring, but he's a liar. Find him in the Hlaalu Canton Plaza and bring me that ring." (Starts Juicedaw Ring)
"What? Nar's already dead? Well, serves him right. You want more orders, I got 'em." (If Nar is already dead before you receive the orders)
"Just go to the Hlaalu Canton Plaza and get me the ring from Nar gro-Shagramph." (If you don't have a juicedaw feather ring in your inventory)
"You have the ring? Good. Give me the ring and I'll get your pay."

"Nar's dead? I like your style, %PCRace. Give me the ring and I'll get your pay." (If Nar is dead and you have a juicedaw feather ring in your inventory. Options and responses are the same as above.)
"Nar gro-Shagramph learned his lesson." (After Juicedaw Ring has been completed)
"You've been expelled, and I don't have to talk to you about any contracts."

"Yes, her. Go collect that debt from her. Find her in Ald'ruhn, at The Rat in the Pot." (Available during Lirielle's Debt)

"Nar gro-Shagramph said he'd deliver a ring to Ranes Ienith, but he hasn't delivered. Go talk to Ranes Ienith and bring the Juicedaw Feather Ring to me."
"There's an Argonian that can't keep its mouth shut. Go shut Tongue-Toad's mouth."
"I got a bounty on a Khajiit. Name's Dro'Sakhar."
"Suvryn Doves says that Lirielle Stoine in Ald'ruhn owes him 2000 septims. Get Lirielle's debt money and bring it back to me. You get to keep half of it yourself." (Starts Lirielle's Debt)
"I don't have orders for anyone under the rank of Protector. Check what you need for advancement and come back." (If your rank is below Protector and you have completed Lirielle's Debt)
"I have a bounty contracted worth 500 gold for Adraria Vandacia."
"One of the magistrates has been giving the Fighters Guild trouble. I don't want the Fighters Guild to have any more trouble from Rufinus Alleius."
"I don't have any orders for you. Talk to Sjoring Hard-Heart the Guildmaster. If he doesn't have any orders for you, check with Eydis Fire-Eye in Balmora or Hrundi in Sadrith Mora. I guess you could ask the old guildmaster in Ald'ruhn too." (After you have completed Alleius' Bounty)
"What do you want, %PCRank?" (If you have obtained Master rank in the Fighters Guild and have completed Alleius' Bounty)

"One of the Magistrates has been giving our client trouble. Go to the Grand Council in Ebonheart and kill Rufinus Alleius, and this 1000 septim bounty is yours." (Starts Alleius' Bounty)
"You already killed him? I don't know if I ought to believe that. Well, here's the bounty I owe you." (If Rufinus is already dead before you receive the orders)
"Good work. I hope the guards didn't give you any trouble. Here's the 1000 septims I owe you." (After you have killed Rufinus)
"I don't have any more contracts for a %PCRank right now." (After Alleius' Bounty has been completed)
"You've been expelled, and I don't have to talk to you about any contracts."