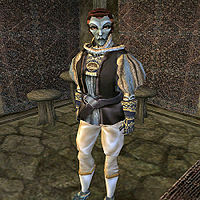 Sovor Trandel, a Dark Elf savant, is a Tough for the Camonna Tong and can be found at the Council Club in Balmora. He offers minor training in Mercantile, Speechcraft, Athletics, and a small selection of overpriced books for sale. Sovor wears an expensive shirt along with a pair of extravagant pants with matching belt, gloves, and shoes. He carries the key to Nerano Manor. Aside from his natural resistance to fire and the sanctuary provided by his ancestors, he knows no spells.

If you ask Sovor Trandel about Nerano Manor before you have started the relevant quest, he says:

During the quest, you may use persuasion and bribery to coax him into giving you the key to the manor:

If you ask him about the manor after he has given you the key, he says:

And if you instead pickpocketed it off him, he says: