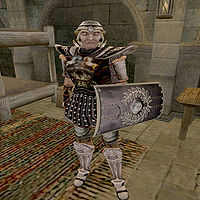 Larrius Varro, an Imperial warrior, is the Legion Champion currently resident at Moonmoth Legion Fort. He is having trouble with some bad people and will reward you for creating a bloodbath. He wields a unique enchanted iron claymore called Temreki, Shackler of Souls. He seems to be a government agent in some respects. Aside from his natural charm and ability to absorb fatigue from others, he knows no spells.

When asked about latest rumors, he will tell you to watch out for bandits when near Hla Oad.

He is also a major trainer in Long Blade, and a medium trainer in Medium Armor and Block.