Radd Hard-Heart in Moonmoth Legion Fort orders you to eliminate the Necromancer Sorkvild the Raven, found near Dagon Fel. 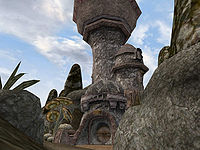 You may take the silt strider from Balmora to Ald'ruhn, then to Khuul, and finally the ship from Khuul to Dagon Fel. Alternatively you may take the guild guide to Sadrith Mora using the Mages Guild and take the ship to Dagon Fel. Upon arrival you only need to ask a few people to find that Sorkvild is holding up in a Dwemer tower just east of town, called Sorkvild's Tower.

You will find three hostile NPCs on the lower level of this tower. Loot their remains to find a Saint's Black Sword and several other items. In the upper level you will find Sorkvild the Raven, who will attack on sight. Loot his corpse for the Masque of Clavicus Vile, bonemold boots, and a random axe. Once he's dead you can search the room to find a Daedric dagger, some rare alchemical ingredients (Daedra skin and several ghoul hearts). There are also two skill books, Night Falls On Sentinel and Charwich-Koniinge, Volume 4. Return to Radd Hard-Heart to complete the quest. He will suggest that you try one of the Knight Protectors in the other Legion Forts for more quests.