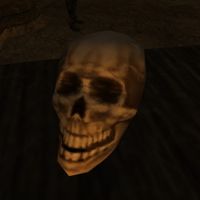 Theldyn Virith in the outpost at Ald Velothi will ask you to go and check on some soldiers he sent to reclaim Shishi, a Velothi Outpost where the Telvanni have set up a base.

Shishi is found to the northwest of Maar Gan, across the mountains. The quickest way to get there is to use a spell of either Divine or Almsivi Intervention to Gnisis, take a Silt Strider to Maar Gan, and then follow Foyada Bani-Dad to the northwest until you see the entrance. Alternatively, traveling to Khuul and taking the silt strider from there is a non-magic option.

Once you're inside of Shishi, talk with Brerama Selas in the outpost, and he'll give you the report. At this point, you can either return to Virith with the report, or stay and help root out the last of the Telvanni. Turning back will net +5 disposition and faction reputation, while going on will give +15 disposition and +10 faction reputation. If you speak to Temis Romavel, you'll learn that they haven't killed all the Telvanni, as they keep hearing sounds from downstairs. The problem is that so far, they have been unable to access the downstairs area. Near Temis, there is a Breton skull on a table, which uncovers a trapdoor on the level below. Use it to go downstairs, and then kill Faves Andas, the Telvanni wizard, inside.

Report back to Theldyn in Ald Velothi to complete the quest.