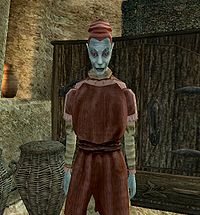 Nalvilie Saren is a Dark Elf clothier who lives in the St. Olms Canton of Vivec. She has a selection of low-quality clothing for sale. She once had a relationship with Hlaren Ramoran of House Redoran, but has long since called it off, though he may still have feelings for her.

If you look hard enough you can find some clues to why she was disgraced. According to Eno Hlaalu, she was "much blown upon" as the Ashlanders call it, and he says he took advantage of her "favors" when he was young as well. Other male Dunmer have the following things to say about her; Elms Llervu: "I see her now and then, but we are not close like we used to be, before I realized what her game was." Nalis Gals: "I am glad my brother warned me about her before she could test her favors on me." Athyn Sarethi: "I already had a daughter her age when she was in the arms of more men than was proper."

Nalvilie Saren wears a common skirt, along with a matching shirt and shoes. Aside from her natural resistance to fire and the sanctuary provided by her ancestors, she knows no spells.

During this quest, Hlaren Ramoran wants you to seek out Nalvilie Saren on his behalf. As quickly becomes clear, Nalvilie does not at all wish to see Hlaren again:

Since there are no relevant topics that you may discuss with Nalvilie Saren, there is no way to try and change her mind on this matter. This becomes quite clear if you try to speak with her again before delivering the news to Hlaren Ramoran, as she will greet you with the following words:

Shirt and Vest for Harvest's EndEdit

Since Nalvilie Saren is a clothier, you may wonder whether she can supply you with the particular garment that you are asked to obtain for this quest. While she does not sell that specific style of clothes herself, she does tell you about a clothier who does: