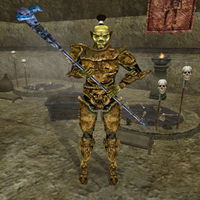 Besides the staff, he is equipped with a full set of Bonemold armor minus the helm: cuirass, greaves, both pauldrons, both bracers, and boots. He also carries a pair of common gloves, a quality restore health potion, and 25 gold.

Like all Orcs, he has a natural resistance to magicka, and can boost his health, fatigue and attack for short periods, at the cost of agility; he also knows the following spells: Ghost Curse, Summon Skeletal Minion, Weak Spelldrinker, Reflect, Commanding Touch, Wizard Rend, Summon Least Bonewalker, Summon Greater Bonewalker, and Weary.

This Morrowind-related article is a stub. You can help by expanding it.
Retrieved from "https://en.uesp.net/w/index.php?title=Morrowind:Koffutto_Gilgar&oldid=2388607"
Last edited on 13 April 2021, at 16:45