Bonemold, also known as Great House armor, is an expensive medium weight armor which can generally only be afforded by Morrowind's Dunmer nobles. The armor is composed of bones which are artificially shaped and assembled before being fixed with resin glues. There are a variety of Bonemold designs for each of the various houses. The book Bone tells the story of their invention.

While principally used to create armor, Bonemold is also useful in the creation of Marksman weapons (bows, arrows, and bolts). It is strong yet flexible, making it ideal for this sort of application, and Bonemold Long Bows are surpassed only by such rare items as the Daedric Long Bow and Auriel's Bow in terms of their power. Bonemold Long Bows actually exceed all others in terms of enchantability.

In the official plugin Entertainers, a Bonemold Shield (of any kind, excluding custom-enchanted ones) is needed to dance "the handy high-kick", a traditional Dunmer dance. 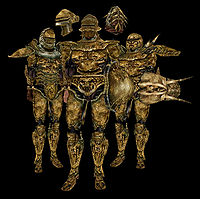 There are several types of Bonemold Armor: 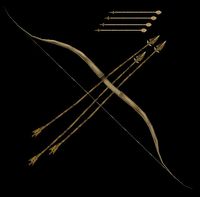