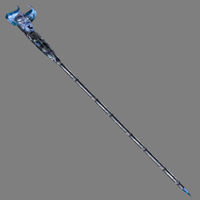 Hasedoki was said to have been a very competitive wizard. He wandered the land in search for a wizard who was greater than he. To the best of all knowledge, he never found a wizard who could meet up to his challenge. It is said that he felt so lonely and isolated because so many feared his power, that he bonded his life-force into his very own staff, where his soul remains to this very day. Magic users all over Tamriel have been searching for this magical staff. Granting its wielder a protection of magicka, it is a sure prize for any magic user. —Yagrum Bagarn, Tamrielic Lore

Carried by Koffutto Gilgar in the Gimothran Ancestral Tomb, which is due west of Wolverine Hall, Sadrith Mora, and due south of Falensarano. A scrawled note gives details about the whereabouts of the staff.