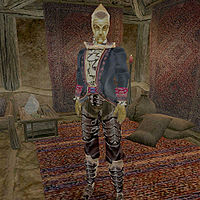 Hecerinde is an Altmer agent who lives in his house on the east bank of the Odai River in Balmora. He is a Captain in the Thieves Guild, and one of the most skilled at his craft.

He is the master trainer in Security, and also offers training in Acrobatics (66) and Sneak (66). He also buys and sells Thieves Tools, though he initially does not have any in stock in most versions of the game (see notes). He only provides these services to fellow Thieves Guild members ranked Blackcap or above.