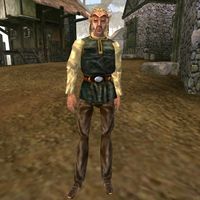 Fargoth, a Wood Elf commoner living in Seyda Neen, will likely be the first person you meet after getting out of the Census and Excise Office. It seems he has misplaced his magic ring.

You are required to take this ring from a barrel before leaving the Census and Excise Office. You can choose to give it to him or keep it for yourself. Giving it to him will earn you his undying gratitude, as well as a good word given to his friend Arrille, which will get you much better prices at Arrille's Tradehouse. You do get a chance to get the ring back as well as some gold, so this is probably the best tactic. It is easy, however, to bypass him and the other residents of Seyda Neen when following the advice of your orders or the text that suggests you investigate Arrille's Tradehouse. He also seems to be on bad terms with the guards, in particular Hrisskar, who enjoys tormenting Fargoth.

While Fargoth has a house in town, he never visits it. No corresponding key exists, though the door is locked (25). Inside, you can find a stash of alcohol in a cupboard, which you can sell for a reasonable amount of gold. If the Entertainers official plugin is installed, a copy of I'm My Own Grandpa can also be found.

Fargoth is wearing a common shirt with matching pants, shoes, and ring. He is also carrying a torch, a jug, and a small amount of leveled gold. Aside from his natural resistance to disease, and the ability to command animals, he knows no spells.