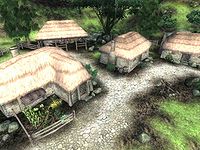 Water's Edge is a settlement located in Blackwood, along Cyrodiil's Green Road. It sits on the northwestern shore of the Lower Niben, halfway between the cities of Bravil and Leyawiin.

The settlement was originally a small farming community of only three Breton families, including the Amelion family, who had inhabited the region for a long time and owned a tomb just outside Leyawiin.

In 3E 433, Marcel Amelion was dragged from his home in the night and held hostage due debts he owed from gambling. The debt was then passed on to his daughter, Biene. Fearing for her life, she contracted the Fighters Guild to raid her family tomb and recover the sword and cuirass of her grandfather, Brusef Amelion. It is unknown if the Guild recovered the items or not, but Biene's debt was cleared. Later that year, the settlement was having trouble with goblins and contracted the Blackwood Company to deal with them. Under the influence of bad Hist sap, the crazed Blackwood mercenaries slaughtered the entire population as well as the livestock, confusing them for goblins. Marcel, freed now that his debt had been paid, returned to Water's Edge to find the site of a massacre.[1]

Despite the annihilation of the community, the settlement somehow survived. Following the Oblivion Crisis, both Bravil and Leyawiin broke away from the Third Empire and became warring, independent city-states. Regardless of the hostile relations, Water's Edge profited greatly from trade between the two cities and expanded to become a sizable town. A tavern named the Gaping Frog was opened.[2]

Circa 4E 40, Prince Attrebus Mede was kidnapped at Sardavar Leed by a group of mercenaries hired to kill him, and taken south into Elsweyr to be sold. He was rescued from his captives by a Dunmer named Sul, and the two were joined by a group of Khajiit who agreed to help Sul in his quest to banish Umbriel. The party journeyed to Water's Edge to get supplies, and Attrebus hoped to recruit aid and send word to the Imperial City that he was alive. However, he was betrayed by his old friend, Captain Florius Larsus, when another group of assassins attacked him. Larsus was killed, and the party of adventurers fled into Oblivion using Sul's magic.[2]