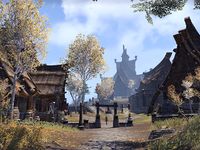 Nimalten[1] (sometimes called Nimalten City)[2] is an ancient settlement located in the Rift, on the banks of the Treva River in Skyrim. Nimalten Barrow is a series of extensive vaults built beneath the town, which were extended for thousands of years due to the fact that certain families refused to bury their dead in the same chamber as certain other families.[3]

In 2E 582, Nimalten was ruled by Thane Fjora. The town was targeted by the Worm Cult, who overran the barrow and made several attempts on the thane's life before being driven off by the Ebonheart Pact.[4]

During the Imperial Simulacrum, the village of Nimalten City was an active settlement, being ruled by Lord Ingmik. It had a rivalry with Pargran Village and Riverwood,[5] It was neighbored by several settlements, including Sunguard in the southeast, and Whiterun in the northwest.[6] By 4E 201 no trace of the settlement remained.[7][8]