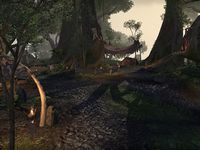 Karthdar (also known as Karthdar Square during the late Third Era)[1] is a town in central Valenwood, located north of Elden Root and south of Silvenar, in the Grahtwood region.

The town was probably founded during the late Merethic Era or soon after King Eplear, a Bosmer warlord, united the tribes of Valenwood under his rule, an event traditionally regarded as the beginning of Year Zero of the First Era. The settlement was ruled by a local treethane, keeper of the ways of the Green Pact, but already by this time, the village was dwarfed by nearby cities of Cormount and Elden Root.[2][3]

In 1E 2714, the small town, along with the rest of Valenwood was conquered by the Second Empire, after centuries of unrelenting warfare along the border with Cyrodiil and a plague from Thras.[4] Although the province became occupied by the Imperial Legion, they continued to experienced resistance from some natives for several years.[5]

During the Second Empire rule of Valenwood, each of the treethanes of Falinesti, Silvenar, Haven, Cormount, Elden Root, and Woodhearth were given a minor kingdom, rising from local to regional powers. This way, Valenwood was divided into six independent kingdoms ruled by local Bosmer nobility, but under the Second Empire banner and protection. During this time, Cormount Gorinir kings ruled over Karthdar treethanes.[4]

In 2E 580, Karthdar was incorporated to the First Aldmeri Dominion along with the rest of Camoran-controlled Valenwood after Blacksap Rebellion was put down by Ayrenn and Aeradan Camoran joined forces.[6][3] In 2E 582, the treethane asked the Vestige for help. The forest had turned against the village, forcing the inhabitants to take refuge in their sacred cave. According to the treethane, only a gross violation of the Green Pact; like the harming of the sacred blossom, Sanguine Alendil, which was cut from its stem; could cause the senches and spriggans to attack and the newcomer was asked for investigate who was responsible for correcting a violation of the Green Pact. Three kinds of proof were required for judgment: witness testimony, physical evidence, and a magical omen. Without all three, no judgment could be rendered. The Vestige eventually found the needed proofs and judged one of the villagers as the culprit, who was, in turn, consumed by a sentient strangler, deep into the sacred cave, and believed to impersonate the Green Pact itself. After "justice" was done, senches and spriggans retreated to their home forests and Karthdar returned to normality. The town remained in Aldmeri hands until the eventual dissolution of the Dominion.[7]

In 2E 830, Karthdar was annexed, along with the rest of Valenwood, by the Second Aldmeri Dominion after the intervention of Summerset in another Camoran civil war.[2] However, the catastrophic use of the Numidium by Tiber Septim resulted in the conquest of both the entire of Valenwood and the Summerset Isles in 2E 896, ending the Second Aldmeri Dominion control of the settlement, which was incorporated to the Third Empire.[8]

Since the beginning of the Third Era, Karthdar became part of the Province of Valenwood.[9] The small town remained in Imperial hands except for the Camoran Usurper Rebellion between 3E 249 and 3E 267.[10][11] During the Imperial Simulacrum in the late Third Era, the town of Karthdar Square was an active settlement, being ruled by Baron Litan. It had a rivalry with Thormar Keep.[1] It was neighbored by several settlements, including Lynpar March in the southeast, and Moonmont in the west.[12] The Oblivion Crisis that ended the Third Era and weakened the Empire provided the opportunity for the Thalmor to seized the Summerset Isles. In 4E 29, a Thalmor-backed coup overthrew Valenwood's government, routing Imperial forces and their Bosmer supporters. Alinor and Valenwood then proclaimed a union, and a new Aldmeri Dominion was formed. The village fell into Aldmeri hands for the third time in history.[13]

Most aspects of daily life in Karthdar is limited by the harsh enforcement of the Green Pact.[7]

Due to the prohibition of harming plants and trees, many merchants across Grahtwood are attracted to sell "natural-encountered" wood to supply the town needs. However, it is common to sell cut wood, but saying that it was found in the wilds.[14]

Drug consumption is also limited by the Treaty of Frond and Leaf and local Bosmer smoke dried bugs, especially sweetgnats, in pipes carved from meerschaum.[15] Besides the pipes, village artisans are known for their fine works on alabaster and for labeling them with the initials "KA": Karthdar Artisans.[16]

The youth of Karthdar use a seven-part extensible rod of horn and antler in their charming game of "Strangler Teaser". The use of bone and ivory in making daily utensils is common in Green Pact Bosmer villages.[17]