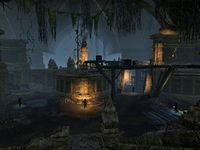 Moonmont during the Imperial Simulacrum

Moonmont was a Khajiiti temple located in the border region of Reaper's March, in the province of Valenwood. Moonmont is a sacred temple dedicated to twin gods that represent the moons, Jone (which represents Secunda) and Jode (which represents Masser). Moonmont currently serves a prison for the Dark Mane.[1]

Moonmont has been a sacred temple dedicated to Jone and Jode for quite some time. It was spearheaded by a clergy of the Two-Moons Dance. But when the Imperial Legion invaded the region of Reaper's March, the flow of pilgrims that would usually come to Moonmont were severed, and for protection, the Two-Moons clergy was forced to abandon the site until the situation was over.[1]

As the situation slowly fell in favor of the Aldmeri Dominion, the Dark Mane had taken refuge in Moonmont, sealing himself away from the outside, corrupting the temple. The Lunar Champions, Khali and Shazah, as well as, the Moon Hallowed, traveled to Moonmont and undone the seal on Moonmont. Traversing through the corrupt temple, the three battled against Dro-m'athra that defiled the temple and confronted the Dark Mane in the inner sanctum. The First Mane, Rid-Thar-ri'Datta had given the Moon Hallowed a choice, between the Lunar Champions. One must continue on the Two Moons Path while the other must be sealed in Moonmont, with the Dark Mane forever. In the end, the Dark Mane was imprisoned and one of the sisters continued for the Two Moons Path in Dune.[2]

During the Imperial Simulacrum in the late Third Era, the village of Moonmont was an active settlement, being ruled by Lord Ancher. It had a rivalry with Stone Fell and Lynpar March.[3] It was neighbored by several settlements, including Eldenroot in the south, Karthdar Square in the east, Silvenar in the northwest, and Stone Fell in the north.[4]