This article is about the city. For the person, see The Silvenar. 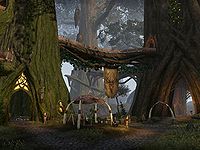 "In a week's time, the little boat bumped along the shallow, calmer waters of the foaming current the Xylo had become, and Decumus Scotti first saw the city of Silvenar. If Falinesti was a tree, then Silvenar was a flower. A magnificent pile of faded shades of green, red, blue, and white, shining with crystalline residue." — Waughin Jarth, "A Dance in Fire, Chapter 5"

Silvenar is one of the eight major cities in the province of Valenwood,[1] situated in the primordial jungles of Malabal Tor. Nestled in the river glades of the Silvenar Vale, it is a city of unrivaled beauty[2] known for its magnificent shades of colored trees, combined with an intricate web of translucent amber.[3] Not only is it one of Valenwood's six major countries,[4] it is also the holy city of the Silvenar, the spiritual leader of the Bosmer and the embodiment of the Green Pact.[5] It is unknown whether the city came first or the person.[6] 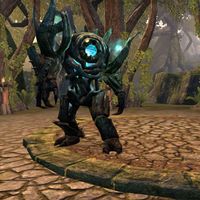 The Guardian of Silvenar 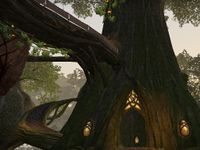 The Graht-Oak Trees of Silvenar

Silvenar is one of the several cities built from the mighty Graht-oak,[7] seasonal, migratory trees that are prevalent across the province and have since rooted throughout the land. It has rooted somewhere in the heart of Valenwood, on the banks of the Xylo River,[3] but some sources claim that Silvenar is perched on the edge of Elden Grove.[2] Like other graht-oak cities, Silvenar is divided between the common dwellings on the forest floor occupied by the other races, and the high canopies where the Wood Elves typically lived.[7] There are tall minarets and spires built from marble that rise above the tree-top,[2] whereas, the streets and bridges of Silvenar are coated in its signature amber.[3] In the mid-Second Era, the graht-oak was excavated by the Ebonheart Pact, who created tunnels underneath the city called the Roots of Silvenar.[8]

The city is rooted high above the ground and is surrounded by a ravine populated by creatures of the forest like Senche-Tiger. The only way into the city is through a large bridge that goes over the ravine and onto a platform, where the bound Lurcher spirit guards the city.[9] The ground floor is an open circle centered around the largest tree. Smaller trees surround the circle and have bridges connected to each other. The Silvenar's Audience Hall, found in the Palace of the Silvenar is located in the highest canopy of the city. It is described as an enormous dome that meets at the top and thin rays of light come down. The palace itself is made of twisted and uneven spires of scarlet, like a sunrise. The bridge to the palace is bent and petal-like.[10] Silvenar is neighbored by several settlements, including Black Park to the west, Ebon Ro to the northeast, Longvale to the southwest, Meadow Run to the south, Moonmont to the southeast, Stone Fell to the east, and Vulkwasten Wood to the north.[1] 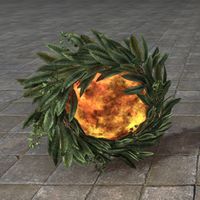 Silvenar is one of the graht-oak cities of Valenwood, which all represent the mythical Tower of Green-Sap.[11] There is a myth surrounding Silvenar's founding, in that the city was once a blossoming grove until through some spell or natural cause, the tree sap had started to greatly flow a translucent liqueur over the colorful trees and it formed the city that we know today.[3] The earliest records of the settlement comes from the Merethic Era, in which it flourished when trading with the vast city-state at the White-Gold Tower, along with other settlements like Ceyatatar and Woodhearth.[12] In these early days, Silvenar was a settlement of Wood Elves that were independent from the other tribes. That was until it was united with everyone else after the ascension of King Eplear and the founding of the Camoran Hegemony in 1E 0. Each of the tribes were ruled by their own Treethane.[4] It is unknown what came first, the city of Silvenar or the person called the Silvenar, but what is known is that before them, there was chaos that was soon followed by generations of "organized mayhem."[6]

Silvenar and the rest of Valenwood served under the Camoran Dynasty until in 1E 2714, when the Second Empire had fully conquered Valenwood, with help from the Colovian West. In order to make sure the province would not retaliate, the Empire had diminished the Camoran's influence greatly and instead shifted power to the treethanes of the Dynasty. Silvenar and five other nations were granted independence from one another and became fully-fledged powers in their own right. When the Empire dissolved in 2E 430, the Camorans attempted to reclaim their former territories and their power, but the other nations were too culturally different from each other to become a unified state. However, without a singular authority to curb their ambitions, Silvenar and the other nations began to wage with each other and were even harassed by foreign forces. That was until the Aldmeri Dominion intervened and set things straight.[4]

The Silvenar and the HoundEdit 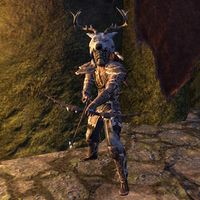 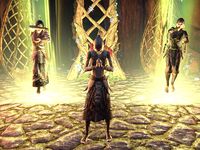 During the Interregnum in 2E 582, Ulthorn the Hound marched into the city with a proclamation. On the eve of the handfasting ceremony for the Silvenar and the Green Lady, he denounces the Silvenar and spread propaganda across the masses in the attempt to recruit them to his cause.[13] Many people began to pledge their loyalty to the Hound, but some people like the city's treethane, Thalrinel showed resistance and was promptly punished.[14] The Hound had then forced the three great spinners, Caerllin, Dothriel, and Einrel to create a barrier around the city from their woven memories. The Hound retreated to the Silvenar's Audience Hall, where he started the handfasting ceremony with the possessed Green Lady, Gwaering.[9]

After being rescued from the confines of Jathsogur, the current Silvenar, Indaenir led the retaking of the city with his allies from the Aldmeri Dominion. An Agent of the Dominion broke down the barrier and defeated the Guardian of Silvenar, bringing the Dominion with them. They soon freed each of the spinners from their prisons across the upper-tier of the city and eventually made their way to the Silvenar's Audience Hall. They were able to interrupt the ceremony, but was forced to defeat the Green Lady and kill the Hound. With the Hound defeated, the Silvenar and the Green Lady were able to go forward with the ritual and their bond had formed.[15] However, on their way to the ceremony, the Mane, Akkhuz-ri had turned corrupted and attacked his entourage. He had soon fled to Reaper's March, near Fort Grimwatch and the Agent was sent to follow suit.[16]

Silvenar in the Third EmpireEdit

When the province of Valenwood was inducted into the Third Empire, Silvenar became the center of its own kingdom, since at least the reign of Emperor Pelagius Septim I. When he passed away in 3E 41,[17] the former Queen of Silvenar, Kintyra I became his successor.[18] It was well-known that the King of Solitude, Pelagius III would often lock the prince and princesses of Silvenar in his room and would only release them if an unsigned declaration of war was slipped through the door.[19] During the Imperial Simulacrum in the late Third Era, the city-state of Silvenar was an active settlement. It was ruled by King Paligorn and it had a rivalry with several cities, namely Arenthia, Eldenroot, and Falinesti.[2]