Lore:Conclave of the Eleven Forces 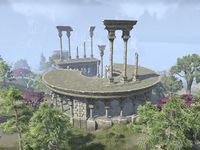 The Keep of the Eleven Forces

The Conclave of the Eleven Forces is the Council of the Psijic Order, based on the Isle of Artaeum. It is also known as the Council of Artaeum. Headed by Mystic Iachesis in its beginnings, the Council and the Isle disappeared from existence in the Second Era, only to return years later without many of the original Council members or Iachesis.[1] The Council and the Isle of Artaeum are currently led by Loremaster Celarus.[1] The Council was founded when Altmer Elders from Summerset Isles rebelled against the change of ways from those of Aldmeris to the ones now considered customary in the Isles. The Psijic Order was founded by the elders and the Psijics still practice the Old Ways of Aldmeris, or Mysticism[2][3][4]. They were formerly based in the Keep of the Eleven Forces when they still operated in Summerset.[UOL 1]