Aevar's strength had returned, so he traveled on to the Tree Stone, though the Good Beast did not follow him. When he arrived, the All-Father spoke to him.

"The First Trees are gone, and must be replanted. Find the seed and plant the First Tree."

Aevar traveled again through the Hirstaang Forest, searching for the seeds of the First Tree, but he could find none. Then he spoke to the Tree Spirits, the living trees. They told him that the seeds had been stolen by one of the Falmer (for they are the servants of the Adversary), and this Falmer was hiding them deep in the forest, so that none would ever find them.

Aevar traveled to the deepest part of the forest, and there he found the evil Falmer, surrounded by the Lesser Tree Spirits. Aevar could see that the Spirits were in his thrall, that he had used the magic of the Seeds and spoken their secret name. Aevar knew he could not stand against such a force, and that he must retrieve the seeds in secret.

Aevar reached into his pouch and drew out his flint. Gathering leaves, he started a small fire outside the clearing where the Falmer and the ensorcelled Spirits milled. All the Skaal know the Spirits' hatred of fires, for the fires ravage the trees they serve. At once, the Nature of the Spirits took hold, and they rushed to quell the flames. During the commotion, Aevar snuck behind the Falmer and snatched the pouch of Seeds, stealing away before the evil being knew they were gone.

When Aevar returned to the Tree Stone, he planted the tree in the ground, and the All-Maker spoke to him.

"The Gift of Trees is restored. Once again, the Trees and Plants will bloom and grow, and provide nourishment and shade." 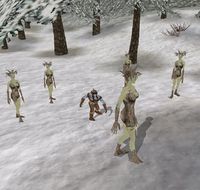 The seed thief and his trees

The Tree Stone is roughly in the center of Solstheim in Brodir Grove, south or southeast from the spring of the Harstrad River. Indeed, if you head southeast from the very start of the river, you should soon see the stone pillar. Activate the stone to learn that you must next travel east and find the one who has stolen the seeds.

Just east and a bit north from the stone you should spot five Spriggans surrounding a single Riekling (and get a journal entry to that effect if you are close enough). They will all attack you at once if you get close enough or if you attack one of them so be prepared. If you haven't fought a Spriggan before, you'll have to kill each of them three times before they stay dead. Try and use ranged attacks and area effect spells as much as possible before getting into melee. Fire Damage is particularly effective. This can be a tough fight for even high levels on a 100 difficulty. 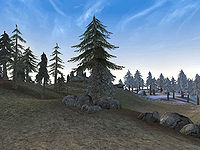 It seems that you must plant the seeds almost next to the stone. Move to the circle of stones a bit northwest from the stone and directly behind it and you will automatically receive a message box to plant the seed saying:

You will have two options to choose from — Yes or No. Return to the Tree Stone after selecting Yes and activate it to complete this portion of the ritual. The tree will grow as time passes in the game.