Aevar first set out to retrieve the Gift of Water, so he traveled to the Water Stone. It was there the All-Maker first spoke to him.

"Travel west to the sea and follow the Swimmer to the Waters of Life."

So Aevar walked to the edge of the ocean, and there was the Swimmer, a Black Horker, sent from the All-Maker. The Swimmer dove into the waters and swam very far, and far again. Aevar was strong, though, and he swam hard. He followed the Swimmer to a cave, swimming deeper and deeper, his lungs burning and his limbs exhausted. At last, he found a pocket of air, and there, in the dark, he found the Waters of Life. Gathering his strength, he took the Waters and swam back to the shore.

Upon returning to the Water Stone, the All-Maker spoke. "You have returned the Gift of Water to the Skaal. The Oceans again will bear fruit, and their thirst will be quenched."

The Water Stone is marked on the west side of the island between Hvitkald Peak and Thormoor's Watch (it is actually marked on your paper map as well). This area is almost entirely white, especially during a snow-storm, so it can be very difficult to find landmarks. The hostile creatures in the area also make matters worse. Look for a large, dark gray pillar on the side of a mountain in the Moesring Mountains area. If you follow the coast you should easily see the Varstaad Caves entrance. The Water Stone is directly south of that entrance on the hill. 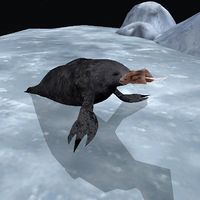 Once you activate the water stone you are told the same story as in the ritual book the shaman gave you. Travel west to a small island off the coast and follow The Swimmer (a black horker) to find the Water of Life. The island is actually to the northwest from the Water Stone, or directly west from the Varstaad Caves entrance and is close enough to be visible from the shoreline. In the center of the small island you'll find a black horker named the Swimmer. As soon as you get near to it, the horker will take off towards the north. Stick close to the horker or it will wait until you catch up to it. The horker swims close to the surface so you don't necessarily need any Water Breathing spells. The horker will stop once it reaches the entrance to Stahlman's Gorge. 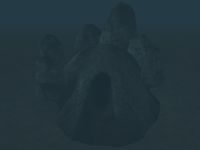 The entrance to the cave is on the bottom of the sea floor where the Swimmer stops. You will need a Water Breathing spell as the cave is underwater a far way down (a strong swimmer could make it without it). At the end of the tunnel you'll find a skeleton guarding the Waters of Life (a small potion bottle). There is also a potion of Swift Swim and Water Breathing that you may wish to pick up before you go. You will receive a journal entry to return with the Waters of Life to the Water Stone. Return to the Water Stone and activate it to complete this portion of the Ritual.