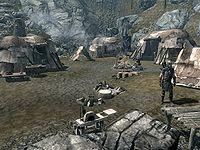 Whiterun Stormcloak Camp is a Stormcloak camp in Whiterun Hold, located south of the Ritual Stone and east of White River Watch. 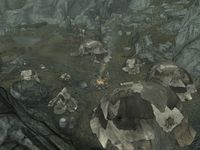 The camp is commanded by Hjornskar Head-Smasher, and is never commanded by Galmar Stone-Fist, as he commands the Whiterun Military Camp during the related quest. Unlike most Stormcloak camps, it has no Stormcloak quartermaster.

It is a typical Stormcloak camp, consisting of a central campfire with a cooking spit hanging over it, around which the rest of the camp is arranged. To the northwest and southeast of the campfire are three small tents containing unowned hay piles. To the southwest of the campfire is the command tent, containing a lit brazier and a large table covered with a map of Skyrim showing the progress of the civil war and the various forts and cities held by each side. This is where the commander spends most of his time. To the right of the command tent are some barrels. To the left of the command tent is the commander's tent, containing an owned bed roll, an unlocked chest, and an end table. To the east is the hospital tent, which contains three hay piles occupied by wounded soldiers. To the left of the hospital tent is a table with a built-in alchemy lab and a low table holding a random potion of health and a random potion of healing. Behind the hospital tent are two picketed horses. They are owned, and taking them is considered stealing. North of the campfire is a wood chopping block. Beyond the block beside a square stone arch is a workstation, consisting of an anvil, a grindstone, and a workbench. A long wooden table and a crate hold various iron and steel weapons and armor. West of the workstation among some rubble is a locked chest.

Any time Whiterun Hold is controlled by the Stormcloaks, this camp will not be present; a hunter's camp will be here instead. As long as you haven't completed Joining the Legion, you are free to sleep in the small tents.