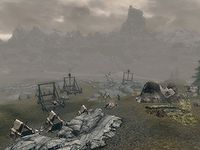 Whiterun Military Camp is a Stormcloak camp set up east of Pelagia Farm for the attack on Whiterun.

The camp only appears during the Battle for Whiterun. The camp itself will appear regardless of the side you've chosen in the war, but a map marker will only be added during the Stormcloak version of the quest, in which case it immediately appears as discovered, allowing you to fast travel to the camp straight away.

As soon as you arrive during the quest, the camp is in an uproar, with three catapults each manned by a Stormcloak soldier firing flaming missiles at Whiterun. The camp features a total of seven small tents, which contain no bed rolls or hay piles. In the middle of the camp is the command tent, containing a large table covered with a map of Skyrim showing the progress of the civil war and the various forts and cities held by each side, with a Stormcloak soldier studying the map. A few steps southeast of the command tent is a corundum ore vein. To the west of the main camp, Galmar Stone-Fist is giving a motivational speech to a group of ten Stormcloak soldiers.